My colleague, Dave Patterson, and I originated the technique of using immersive VR for pain control in the mid ‘90s. Since then, our interdisciplinary research team at the University of Washington in Seattle, including Hoffman, Patterson, Carrougher, Richards, Seibel, Jensen and Sharar, has been studying how severe burn patients act when immersed in Snow- World. We have been informally observing patients’ pain behavior, such as whether or not they pull their hand away from the nurse. We have also been empirically quantifying how burn patients respond to being in VR–how being in VR affects their pain, as measured with patient pain ratings and fMRI brain scans. We have also begun to explore why burn patients feel less pain while in VR, i.e., the mechanisms of VR analgesia.

Allowing patients to “go into” VR during painful procedures can help reduce excessive pain non-pharmacologically. Compared to standard of care (pain medications with no VR), researchers consistently find 30-50% reductions in pain ratings when VR is used adjunctively, that is, in addition to usual pain meds, during civilian severe burn wound care and during physical therapy to stretch the burn patients newly healing skin. Military patient populations with combat-related burn injuries are showing similar benefits of VR analgesia. In addition, fMRI brain scans testing healthy volunteers receiving brief thermal pain stimuli have shown large reductions in pain-related brain activity associated with VR analgesia (Figure 1). We have also used VR to treat burn patients sitting in a tub of water. Using a custommade static fiberoptic VR helmet with 800,000 tiny fibers per eye, we showed that VR analgesia can reduce some of the most severe pain in medicine–severe burn wound care/debridement in the hydroscrub tanks. Surprisingly, contrary to prevailing wisdom that distraction is less effective at higher pain levels, our results showed that VR was most effective in patients who needed it the most, those with worst pain scores of seven or higher on a scale from zero to 10. 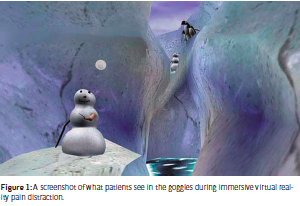 Immersive VR is hypothesized to reduce pain via a non-pharmacologic attentional mechanism. Patients look into VR goggles and the goggles block patients’ view of the hospital room so they cannot see the wound care. Instead, the goggles substitute synthetic computer-generated images from an illusory 3-D virtual world. Noise-canceling earphones block sounds from the hospital room, and substitute more calming music and sound effects. The patient interacts with the virtual world, throwing snowballs at objects, which makes it even more attention grabbing. According to our logic, pain requires attention and patients have a limited amount of attention available. VR draws upon these limited attentional resources, leaving less attention available to process incoming pain signals. Consistent with involvement of an attentional mechanism, burn patients report spending much less time thinking about their pain during wound care while in SnowWorld. In addition, laboratory pain studies have shown that on a divided attention task, where the participant’s primary task is to monitor a string of numbers, performance on the primary task drops significantly when participants go into VR.

To maximize VR analgesia for burn patients in SnowWorld, my colleagues and I have designed our VR systems (hardware and software) to maximize immersion of the VR system in an attempt to maximize VR analgesia. In laboratory studies at the University of Washington, Seattle, based on the earlier framework of immersion laid out by Slater and Wilbur, we have manipulated helmet quality and interactivity to see if these manipulations affected the chances that participants would see if these manipulations would affect the amount of VR analgesia reported by participants in our VR systems. Immersive VR appears to show a non-pharmacologic dose-response relationship where more immersive VR systems (presumed to be more attention grabbing) reduce pain more effectively than less immersive VR systems. For example, in a between-groups, double blind analog pain study manipulating only hemet quality, more immersive medium field of view VR goggles (via a commercially available NVIS SX LCD helmet) led to clinically meaningful reductions in pain in two out of three participants, whereas less immersive narrower field of view VR goggles (Cy-Visor) led to clinically meaningful reductions in pain in only one out of three participants. In another study, one group interacted with the virtual world via a trackball and the other group was not given a trackball and thus viewed SnowWorld passively. Interactivity increased the objective immersion of the VR system, and as predicted, increased the analgesic effectiveness of immersive VR. 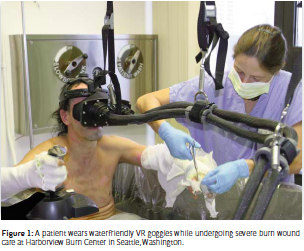 In summary, so far, high tech VR helmet quality, such as wide field of view goggles, and interactivity, such as playing SnowWorld with a mouse-like trackball or other input device, have been isolated as important factors contributing to VR analgesia. Improvements in the field will become pertinent in future research, such as a pair of scanning fiber VR goggles that Hoffman’s team are currently working on building.