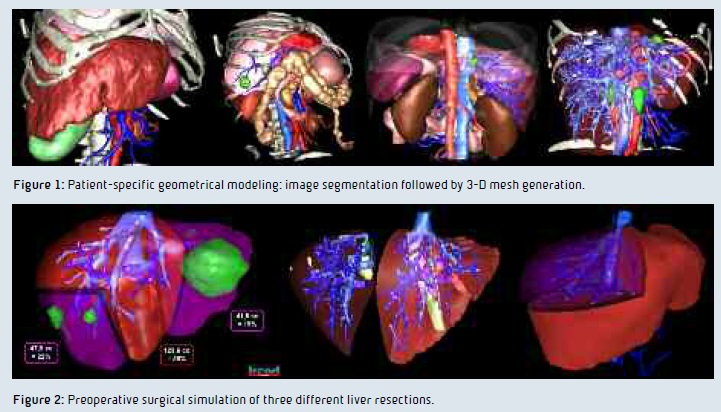 Violent behavior and road accidents account for the majority of liver injuries. Liver injuries, secondary to blunt trauma, are typical in Europe, while penetrating injuries are the most frequent in North America. If liver trauma represents between 15-20% of blunt trauma, its mortality rate grows to 50% of all blunt trauma deaths. Surgical procedures remain the option that offers the foremost success rate. Regretfully, surgery remains complex due to huge vascular variations in the liver vascular anatomy from one patient to another. Our work, developed within the scope of the European PASSPORT Project of the 7th Framework Programme, aims at overcoming these limitations by offering preoperative surgical simulation based on patientspecific modeling.

There is a large set of medical image processing methods providing liver segmentation. These systems are usually limited to the liver and its internal structures, which is of course not sufficient to develop patient-specific hepatic surgical simulation. Indeed, such surgery requires the modeling of surrounding organs in order to be realistic enough. To overcome such limits, we have developed and validated a new method based on hierarchical segmentation of visible organs, from the simplest to the most complex. This method allows us to visually extract the main organs of the thoraco-abdominal area. The second step then delineates veins, the liver and its internal lesions.

For many years, the anatomical segmentation of the liver has been the topic of many discussions. The Couinaud segmentation is currently the reference used by most surgeons but is criticized by authors who point out the limitations or even the errors of that segmentation. Couinaud himself described such topographic anomalies in 2002. In order to solve this problem, we have defined a new correct functional anatomy. This new definition is based on a simple rule applied specifically to each patient: two portal venous subnetworks can only be in a same segment if and only if they come from the same crossing of a same portal branch. For the sake of rigor and in order to use that definition in clinical routine, we proposed to implement a labeling system based on numbers and letters close to Couinaud’s classification. Our validation shows that the new labeling is always topologically correct, due to the definition.

We have first developed an Image Viewer Software working on Windows, Linux and MacOS. VR-Render WeBSurg Limited Edition©IRCAD2010, available freely on WeBSurg, (www.websurg.com/ softwares), has been downloaded and is used by more than 8,000 users. We have then developed a virtual surgical liver resection planning software. VRPlanning ©IRCAD2010 offers the opportunity to resect the liver into several topological components. Thus, it allows for multi-segmentectomy. It also automatically computes the future liver remain rate and volume after resection.

In order to collect anonymous patientspecific data and to validate 3-D modeling and surgical planning software, we have opened a free online service for the European PASSPORT project partners. More than 300 clinical cases have been modeled since 2008. Each 3-D modeling was realized and validated by experts using VR-Render and VR-Planning software. The resulting algorithm shows 93% sensitivity and 94% specificity, 1.46mm of average precision in three-minute processing. First clinical applications show the great benefits of using such software for preoperative hepatic liver surgery.

Our work, developed in the scope of the European project PASSPORT, has allowed the development of patientspecific geometrical and anatomical modeling. Combined with surgical planning sof tware dedicated to liver surgery, it offers new possibilities allowing the improvement of hepatic surgery. The last year of the project will aim at finishing software integration by adding mechanical and biological modeling. Combined with the SOFA open-source framework, resulting patient-specific models will lead to a preoperative surgical simulator that could be used for planning and education. Moreover, the multicentric clinical validation will be pursued in order to prove clinical benefits of the new anatomical modeling in link with patient-specific surgical planning.