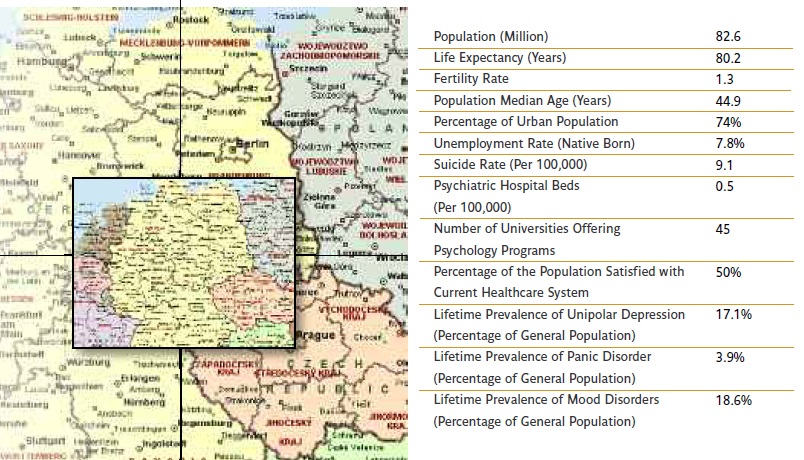 In Germany, psychology was formulated as a field of study in the 19th century as the trends in science began to be applied to the mind. Many early psychologists were in fact physicists, doctors, and experimental physiologists. The connection between science, technology and psychology was established early on, and the integration of the fields persists today.

Psychology as an Academic Discipline is Born

One such scientist, Wilhelm Wundt, whose students included Emil Kraepelin, James Mc- Keen Cattell, and G. Stanley Hall, opened the first experimental psychology lab in Germany at the University of Leipzig in 1879. Germany is credited with establishing psychology as an academic discipline, and the trend quickly spread to universities. Journals, such as PSYCHE, began circulating, discussing innovations and new theories that developed as Germany became more prominent in the field. German was an important and often-used language for psychological publications and Germany continued to be a leader in the field of scientific psychology through the first third of the 20th century.

Revolutionary work in the field included research done by Hans Berger, a student at the University of Jena who invented and recorded the first electroencephalogram (EEG) after becoming obsessed with the idea of “psychic energy,” by Hermann von Helmholtz who studied attentional processes, and Hermann Ebbinghaus’ experimental studies into memory. The results of their successful research continue to have an impact on psychological practices today.

Theories of psychoanalysis developed by Sigmund Freud, from the neighboring country of Austria, along with Carl Jung, caught on quickly in Germany and institutions were established to utilize and build on these new practices. The Berlin Psycholanalytic Institute, founded by Karl Abraham and Max Eitingon, was opened in 1920 to develop upon these new approaches and foster the development of the field. Institutions, in turn, transformed psychology into a profession as well.

The Impact of National Upheaval

The devastation that followed World War I led to an immense economic depression, as well as a loss in morale that inevitably gave rise to Nazi Germany. Under Adolf Hitler’s Third Reich, Freud’s practices were banned and many of his books were burned throughout Germany. Instead, Hitler carried out his own philosophy of ridding Germany of all that he deemed unfit for his country. The mentally ill and the disabled were the first targets of persecution.

In 1933, the Sterilization Law was passed in Germany that allowed the obligatory sterilization of anyone suffering from hereditary diseases such as schizophrenia, manic-depressive insanity, hereditary epilepsy, and any severe hereditary deformity. The sterilization and legalized murder of mental undesirables caught the attention and admiration of many eugenicists of the time and helped fuel the eugenics movement worldwide. In Nazi Germany, mental patients were sent to extermination camps alongside Jews. Thousands were killed in the gas chambers, and camps, and many were subjects in lethal experiments.

Although many psychologists still had respect for Freud’s theories, non-Jewish institutions were established in order to continue practicing under Hitler. The German Institute for Psychological Research and Psychotherapy in Berlin was opened in 1936 under the leadership of Matthias Heinrich Goring. Eminent Jewish psychologists were harassed, fired from their jobs, or murdered, leading others to immigrate or resort to suicide.

Academic psychology was dealt a devastating blow and Germany’s scientific output dramatically decreased as experts in the field fled the country or were murdered. Increasingly, psychology professors at German universities held positions based less on their history of scientific excellence, and more on their political loyalty to the Nazis. More than half the professors in West Germany were former members of the Nazi party in 1947. After the war, the field’s deficits were not addressed and only a few of the emigrated scientists returned home; only one psychology professor was invited to return to his previously held chair.

Following the defeat of Nazi Germany at the end of World War II, survivors of the war, particularly those who survived concentration camps, suffered from severe psychological distress. The need to rehabilitate survivors was a major concern for medical professionals and researchers in postwar Germany, and sparked the reemergence of mental healthcare. In 1961, psychoanalyst William G. Niederland created the term “Survivor Syndrome” to describe the effects experienced by Holocaust survivors. The syndrome encompassed a wide range of symptoms including anxiety related to death that often resulted in physical deterioration such as ulcers and colitis, withdrawal, emotional numbing, distrust in relationships, reoccurring dreams, depression, images and thoughts about death triggered by smells and other senses, and guilt about surviving while so many others perished. Niederland’s outline provided a basis for treatment to try to alleviate some of the pain and anguish that plagued survivors.

The Reform of Healthcare

In the mid 1970s, during a time of drastic social and political reform, Germany adopted a community-based mental healthcare system. The deinstitutionalization of the system continued, and in 1990, when East and West Germany were reunited, dramatic changes in the overall structure and quality of care resulted. Organized as a subsidiary system controlled by the 16 federal states, German healthcare is spread among many sectors and characterized by regional differences.

Although the general population is satisfied with the current healthcare system, services and care remain costly. The main concern then, is if and how the system can be adequately maintained without increasing costs.

A recent report by a German health insurance company pointed to the dramatic increase in sick leaves due to psychopathological distress in recent years. With an increasing workload and resulting stress negatively effecting the population, this trend calls for new, improved treatment approaches.

While most labs implementing Virtual Reality (VR) in a research context are primarily involved in the fields of engineering science or neuroscience, a small number are dedicated to work involving psychology and clinical psychology.

In these labs, VR is used as a tool for basic research into emotions and anxiety and, in particular, to examine treatment of phobias including flight phobia, height phobia, spider phobia, claustrophobia, and social phobia. For analyzing treatment mechanisms, cue and especially contextual fear conditioning, paradigms are realized with the help of VR.

Professor Paul Pauli and Professor Andreas Mühlberger are involved with the psychology department at the University of Würzburg, a public university of Bavaria, and said, “[We conducted] basic research on fear, anxiety and anxiety disorders, and recently established a VR paradigm for contextual conditioning; we found that high trait anxiety is related to enhanced context conditioning.”

Other examples of work include Dr. Oliver Stefani’s use of VR in the field of engineering with the Visual Technologies Team at Fraunhofer addressing effects of lighting and displays on humans. This work studied how light emitting diodes (LED)- backlit computer screens affect circadian physiology and cognitive performance in subjects.

Labs in Germany benefit from mutual collaboration and research with many international groups, including other European countries and the U.S. Germany also draws many international students to develop and diversify their studies; it is the most common destination for foreign studies among Eastern European students.

Professor Pauli believes that ICT research has a strong future in Germany and will help to aid the “exact analysis of behavior in ecologically valid virtual environments; unravel the laws of human behavior and to be able to develop more effective therapeutic tools for treatment.”

These tools will undoubtedly be strengthened by further research and support as ICT methods gain national support and funding in Germany. With a rich history and unwavering ability to overcome past obstacles, Germany is establishing a stable, efficient mental healthcare system for its people.

← It’s All in Your Head: Measuring the Placebo Effect Using fMRI
Benefits of Positive Technology →
Scroll Up