Throughout the years, psychologists, therapists and educators have emphasized the important role of play in child development as a crucial vehicle for learning about the physical and social environment, the self, and for developing social cognition and social relationships. For decades the use of computers in education has been an active area of research. In utilizing interactive devices, educators have seen a profound and beneficial effect on how children develop and grow. In recent years, researchers have been exploring the use of mobile and humanoid robots as “toys” in playful interactions for the education and therapy of children with autism.

Studies into the behavior of children with autism suggest that they show a preference for interacting with objects rather than with other people. Often, children with autism are described as socially isolated, ignoring other people near them. People’s social behavior can be very subtle and could seem, to those with communication problems and a deficit in mind reading skills, widely unpredictable. This can present itself as a very confusing and possibly stressful experience to children with autism. Different from human beings, interactions with robots can provide a simplified, safe, predictable and reliable environment for these children. Interaction with the robots could be an intermediate phase where robots, with specific programmed behavious and specific play scenarios could then become social mediators – encouraging the children to interact with other people (peers and adults).

In this article we present case-study examples from our work with our humanoid robot KASPAR in several projects, e.g. AURORA and ROBOSKIN where the research focuses on ways that KASPAR can be used as a social mediator and engage autistic children in various interactive activities such as turn-taking, joint-attention and imitation games, with the aim of encouraging basic communication, tactile and social interaction skills. 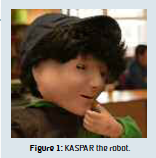 KASPAR, a child-sized minimally expressive robot that was developed by the Adaptive Systems Research Group at the University of Hertfordshire, has a novel design particularly suitable for social and healthcare robotics applications. It acts as a research platform and as assistive technology for our work with children with autism. It uses mainly bodily expressions (movements of the head, hands, arms), facial expressions, and gestures to interact with a human. Aesthetic consistency and reduction in details of the face are key design issues, as well as the robot’s minimally expressive abilities and the recent addition of sensitive skin that are key to engage people in interaction.

An emphasis on the features used for communication allows the robot to present facial/gestural feedback clearly e.g. by changing orientations of the head, moving the eyes and eyelids, moving the arms, and “speaking” in simple, prerecorded sentences. A reduction in detail de-personalizes the face and allows the interaction partner to project his/her own ideas on it and make it, at least partially, what they want it to be. These are very desirable features for a robot to be used in different social and healthcare applications, e.g when used in assistive technology with children with autism, who generally have great difficulties in recognizing complex facial and gestural expressions.

In recent years we have worked with several special education schools. The children varied widely in their abilities and needs (from very low functioning children with autism to high functioning and those with Asperger syndrome). KASPAR was found to be attractive to all these children regardless of their abilities. During this time play scenarios have been developed taking children’s specific strengths and needs into consideration and covering a wide range of objectives in children’s development areas (sensory, communicational and interaction, motor, cognitive and social and emotional).

Observation analysis of play sessions of children with autism at schools showed many case study examples of possible implementation of KASPAR for therapeutic or educational objectives as follows:

• promote body awareness and sense of self,

• help to break the isolation for some children,

All the children with autism who met KASPAR for the first time (children of different age groups and of both genders) were drawn to explore him in very physical ways (see Fig. 1). Tactile exploration is important to increase body awareness and sense of self for these children.

KASPAR Helps to Break the Isolation

Several children with severe autism who have very limited or no language at all, and who often are withdrawn into their own world, got excited in their interaction with KASPAR and sought to share this experience and communicate (in a nonverbal way) with other people. One example is Liroy (Fig. 2) who is known at school to not interact at all on his own initiative with other people (not with teachers, nor with other children). After playing with KASPAR for several sessions he sought to share his excitement with his teacher and also started to communicate with another child and with his teachers.

The use of a remote control, the simple operation and the minimal expressiveness of KASPAR are all encouraging aspects for the children, not only to play with the robot, but to initiate, control and manage collaborative games with other children and adults (Fig. 3). In this scenario the children no longer merely follow instructions of games given to them by adults (which is often the case in classroom settings) but they have the opportunity, with the use of the remote control, to actually manage the game themselves i.e initiate, follow, take turns and even have the opportunity to give instructions to their peers.