Despite current distraction techniques showing mixed results for pain management across a range of medical procedures, clinicians continue to use them. Literature in the procedural pain field has continued to provide a “list” of necessary attributes for distraction techniques including the terms multi-sensory, interactive, intuitive and motivating. Most accessible distraction tools fail to meet these criteria. However, in the context of the current computer generation, it stands out that video games have the potential to be the ultimate distraction technique. But the question remains: Are “off the shelf” handheld video games enough?

In reflection, simple handheld games have not been studied extensively in procedural pain literature. Only a few studies have investigated video games’ impact on pain or anxiety preoperatively, during induction, port access, burn injury, venipuncture and laboratory cold pressor tests. This is surprising, given the fact that this simple, accessible and cost-effective technology is not only motivating for children but also interactive, multi-sensory (visual/auditory) and intuitive. Results for children aged three to 18 years are mixed, but indicate that video games are somewhat effective as distracters but overall offer a “better than nothing” approach to pain management. One study compared a standard video game console to playing the same game through virtual reality technology. The results showed no differences. Another technology upgrade has partly considered clinical and developmental needs when developing the Pedisedate ®, that involved the adaptation of an off the shelf video game to reduce anxiety during nitrous oxide sedation. Results were mixed for the three to nine years olds, with age impacting the usability of the device, reflecting the developmental usability of off the shelf gaming systems. These studies indicate that perhaps both the content and the game console need to be considered in order to meet the physical, cognitive and emotional needs of the user.

Hand-held devices such as Multi-Modal Distraction (MMD) have considered the developmental needs of the user in terms of both content and console, which have led to reduced pain experiences during burn wound care procedures, with orthopedic procedures and preoperative studies following similar trends. We engaged consumers (children and clinicians) within the clinical context, involved developmental experts and technology consultants to ensure games, and included stories and other content to meet children’s distraction needs. Trials have indicated that off the shelf video games are not enough in managing pain when compared to this customized hand held MMD device. 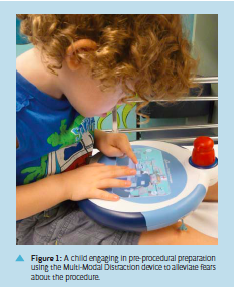 Rassin described the process of developing a computer game to prepare children for surgery, taking the use of video games for procedural pain to another level. This paper did not trial a device but merely discussed what needed to be considered in developing it. It did, however, highlight how customizing allows innovative solutions to procedural pain problems. Our work expanded on Rassin’s customization process by producing content that allowed for an innovative approach to procedural preparation to alleviate fear. Procedural education via the interactive, child-friendly MMD device in the areas of wound care has shown significant reduction in pre-procedural and procedural pain scores.

Non-pharmacological procedural pain management has moved beyond the “better than nothing” approach. Innovative technology has superseded hand held video games that can limit children’s pain through better quality distraction and preparation techniques.