Brain Machine Interfaces (BMIs), a technology that is only about 10 years old, promises to revolutionize the way we diagnose and treat a wide variety of neurological diseases and disorders. Broadly defined, a BMI system provides a direct communication pathway between the brain and a man-made device. The latter can be a an active circuit on a silicon chip, an artificial limb, or even a network of computers. The overarching theme of BMIs is the restoration/repair of damaged sensory, cognitive and motor functions such as hearing, sight, memory and movement via direct interactions between the nervous system and these artificial devices. It may even go beyond simple restoration to conceivably augment these functions, previously imagined only in the realm of science fiction. 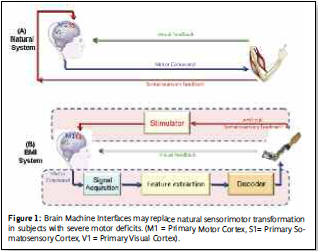 Some striking advances in microfabrication technology and systems engineering, coupled with substantial progress in invasive brain surgery, have fueled the brisk evolution of BMIs. It is now feasible to implant arrays of microelectrodes in select brain areas for sufficiently long periods of time to monitor signals from small populations of brain cells. These signals can now be decoded and used to control external devices, such as robotic limbs, or even be used to stimulate the subject’s natural arms. The interface technology, however, is not restricted to invasive techniques and now encompasses the use of noninvasive recordings (e.g. EEG), albeit at the expense of much lower temporal and spatial resolution, to monitor global brain states during a variety of experimental conditions.

Reliable and sustained brain recordings in patients interacting naturally with their surroundings is key for clinically viable BMIs. This is in part because many complex brain mechanisms during the normal and pathological states can only be monitored over prolonged periods of time, such as detecting epileptic seizure onset. Wireless BMIs constitute one major focus of the community to allow continuous monitoring of brain states in patients at home by telemetering neural data continuously to promptly alert the caregiver. The opportunity for immediate intervention also exists by stimulating or modulating brain activity through BMIs to combat potential symptoms of abnormal brain activity.

The pace of research in this area is rapid to the extent that new techniques continue to swiftly emerge. The paradigm shift being witnessed now in understanding brain function as a result of advances in BMIs is already paving the way for the technology to become a building block in a myriad of emerging clinical applications.