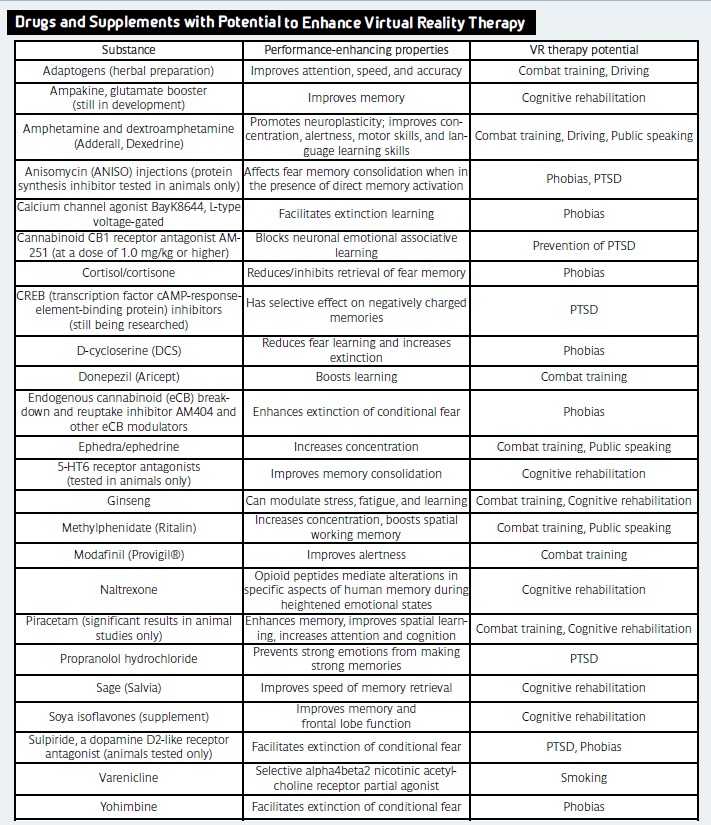 As cognitive neuroscience has advanced, so, too, has the list of possible internal, biological enhancements. Stimulants such as nicotine, which interacts with attention and memory, and caffeine, which reduces tiredness, have long been used to improve cognition. Certain off-label drugs, such as mixed amphetamine salts (Adderall) and modafinil (Provigil®), which have gained popularity on college campuses, are now being used in the workplace as cognitive enhancers. Cognitive enhancers, also known as nootropic drugs, are chemicals designed to increase brain metabolism. Individuals using such substances aim to increase memory, concentration, and attention span, and to enhance the decision-making process. In general, the mechanism of action is through regulating the release of neurotransmitters, modulating the receptors and ion channels, or affecting neuronal gene expression. Most cognitive enhancers in current use are off label because they were discovered to have cognitive-enhancing properties as a side benefit of their original, intended use.

Cognitive enhancers have been in wide use for more than 50 years. Beta blockers, among the first, are a class of drugs in which the initial use was for the control of cardiac arrhythmias and cardiovascular protection after heart attacks, and to treat hypertension. Propranolol, a beta blocker, was invented by Sir James W. Black in the late 1950s and is valued as one of the most significant contributions to pharmacology and clinical medicine of the 20th century. Although the initial use of beta blockers was to manage the heart, many people such as musicians, public speakers, actors, and dancers used and still use propranolol to mitigate the effects of stage fright and tremors during auditions and public performances. Since the 1950s, researchers have discovered many new cognitive enhancement drugs.

How Cognitive Enhancers Can be Used in Virtual Reality Therapy

The following substances with potential to enhance the effects of virtual reality (VR) therapy are presented as examples of possible applications. Many of the studies reviewed have small sample sizes and small effect sizes, and/or the substances have been tested in animals only. Moreover, there are no data available about nootropics currently in the pipeline at pharmaceutical companies. Therefore, current scientific literature is a limited guide to the eventual usefulness of these drugs.

Substances used for cognitive enhancement may potentiate the results of certain types of VR therapy. For example, DCS (D-cycloserine), which helps those with social anxiety learn more from therapy, is aimed at reinforcing learning in cognitive-behavioral therapy. Anisomycin injections, calcium channel agonists, cortisol, dopamine, endogenous cannabinoid modulators, and yohimbine facilitate in the extinction of fear. Glucocorticoids are released during fearful situations to modulate fear, and when clucocorticoids (e.g., cortisol) are given to patients before exposure to a fearful situation or phobia, the cortisol facilitates the reduction of phobiarelated anxiety.

Unlike fear reduction and phobia extinction drugs, cognitive enhancement drugs such as Adderall, Ritalin, and ephedrine increase the user’s concentration on an outside task, which in turn reduces their selfawareness. The outcomes of VR-enhanced public speaking practice sessions and combat training in a virtual environment may be enhanced through the use of these drugs.

VR therapy aimed at enhancing motor skills needed in learning to drive could benefit from the use of amphetamines and dextroamphetamine. Scientists have found that in small doses amphetamines help stroke patients relearn motor skills better and faster than they would with physical therapy alone. Amphetamines seemingly promote neuroplasticity, which is the ability of the brain to create new connections and strengthen existing connections between neurons that enable simple or complex movement.

Modanafil (Provigil®), originally aimed at narcoleptics who uncontrollably fall asleep, and donepezil (Aricept®) aimed at slowing the progression of Alzheimer’s disease, are proven to increase alertness and boost learning. The effects of modanafil in healthy people are increases in concentration, alertness, short-term memory and focus. Donepezil improves cognition and slows the decline of overall function. Adaptogens can increase tolerance to mental exhaustion and may enhance attention in fatigue. Beneficial effects are primarily associated with the hypothalamic-pituitary-adrenal axis, a part of the stress-system that is believed to play a primary role in the reactions of the body to repeated stress and adaptation. Single doses of ginseng extract can affect cognitive performance and exert a direct effect on central nervous system (CNS) functioning, as seen in the modulation of cerebroelectrical activity. Adaptogens, donepezil, ginseng, and modanafil could enhance VR combat training by increasing alertness and enhancing mental acuity and performance for combat training.

Ampakines, under development by pharmaceutical laboratories, amplify memory by increasing the activity of brain chemicals such as the neurotransmitter glutamate, which is important for memory formation. Upon repeated exposure to glutamate within a short period of time, one receptor triggers another, and calcium molecules enter the brain cell. This causes the synaptic connection to change, and is believed to be the basis of memory formation and consolidation.

In animal studies, acute administration before a training session of two different 5- HT6 receptor antagonists improved memory formation. Effective doses of both antagonists ranged from 1 to 30 mg/kg. One of the formulations elicited a 7-fold increase relative to the control saline group.

Studies have shown that brain opioid systems can modify memory and learning processes. In one study, physiologically aroused participants receiving naltrexone, an opioid receptor antagonist, recognized incidental material from a presented story better than did participants receiving placebo, at no expense to memory for thematic material. As a result, naltrexone improved overall recognition memory.

Piracetam, originally designed as an antiepileptic drug, was one of the first drugs to be used off label for cognitive enhancement. Results from animal studies are promising. However, results from studies in which it was used to treat children with Down syndrome were equivocal, with only certain populations showing improved function.

One study of 24 healthy young adults showed that administration of S. lavandulaefolia (sage) resulted in a consistent improvement for both the 25- and 50-μl dose on the “speed of memory” factor. There was also an improvement on the “secondary memory” factor for the 25-μl dose. The data suggest that previous reports of memory enhancement by Salvia may be due to more efficient retrieval of target material.

A soya diet containing high levels of isoflavone phytoestrogens significantly improved memory and frontal lobe function in young healthy male and female volunteers compared with volunteers receiving a soya-free diet for 10 weeks. Soya phytoestrogens have been shown to act like estrogen in the brain, which has a number of direct and indirect receptor-mediated genomic effects that could affect cognition. In addition, estrogen potentiates glutamateinduced calcium signaling. Although it is unlikely that phytoestrogens will mimic all the CNS effects of estrogens, there are sufficient potential mechanisms that could mediate cognitive improvement.

VR has been used as a way to assist patients with brain damage and intellectual disabilities. For example, VR has been used to train cognitive tasks in brain-damaged and intellectually disabled patients by training them in the performance of activities of daily living, such as grocery shopping, food preparation, orientation, road crossing, and vocational training. At The Virtual Reality Medical Center (VRMC), researchers plan to create VR cognitive training tools that specifically target and train working memory, selective attention, and sustained attention processes. Such tools would no doubt benefit from the use of one of the cognitive enhancers discussed in this section.

Safety is a primary concern, as the long-term effects of these drugs for the purpose of cognitive enhancement are unknown, even if no adverse events are apparent in the short term. However, there is medical precedent for accepting risk for the purpose of enhancement, as in the case of cosmetic surgery. The patient may decide that the benefits outweigh the risks.

Fairness in competition is another issue: Could athletes or other competitors gain unfair advantage by “brain doping” before a match? The Olympic Games have banned the use of stimulants during competition, but other sports such as poker have yet to adopt the World Anti-Doping Code. In addition, such drugs may be used prior to competition in practice sessions.

Further, unauthorized users of certain drugs may face fines or even imprisonment. For example, Adderall and Ritalin are Schedule II controlled substances, and Provigil® is a Schedule IV substance due to its lower potential for dependence and misuse. Students with attention-deficit hyperactive disorder (ADHD), who have a legitimate reason for taking a drug such as Adderall, complain about their healthy friends who take it, saying that it gives their friends an unfair advantage while they need the drug to be “normal.” If schools begin testing students for such drugs in the days before an exam, will legal stimulants such as caffeine be banned as well?

Substances that promote cognitive enhancement have the potential to benefit a variety of VR therapy protocols. For example, VRMC may use its fMRI-safe VR device to study the brain’s activity when, for example, a smoking virtual environment is used in combination with a cognitive enhancer to treat addiction. As another example, the Virtual Reality Medical Institute eventually may experiment with propranolol to augment the Interreality in the Management and Treatment of Stress-Related Disorders (INTERSTRESS) device under development by its partners.

Cognitive enhancers may have important consequences for society, and perhaps even profound implications for the future of all people. It is exciting to be involved in neuroscience research in the so-called Age of the Brain, helping patients create achievements that indeed make them feel as if they’re 10 feet tall.