Regardless of how we opine on the current state of healthcare reform, most would agree that pain management is a right, not a privilege. Both the civilian patients we care for everyday and the Wounded Warriors in our military deserve our very best efforts when it comes to controlling their pain and relieving their suffering. Solving the problem of excessive pain may prove more challenging in military populations than in civilian populations. Both physical and emotional suffering are problematic in survivors of combat-related injuries caused by explosions. Patients who experience combat-related blasts have more extensive physical injuries and greater pain severity (Figure 1). Those with combatrelated burn injuries require larger opioid doses for pain than soldiers and civilians with non-blast injuries. 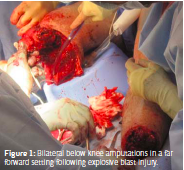 While this often leads to it being cited as a major healthcare expenditure, pain management is about much more than just dollars and cents.

Reduction of unnecessary pain and suffering is a cornerstone of medicine. Inadequate pain management is something we must act upon. The burden of pain is enough to encumber or overwhelm an individual when it is not treated well. Along with the coincident and inherent mental anguish of being in pain at any given moment, there are long term sequelae as well. These may include Posttraumatic Stress Disorder (PTSD), depression, non-restorative sleep patterns and of course, chronic pain syndromes. Even the ability to perform activities of daily living can be compromised when pain is not managed appropriately. This can be a potential problem for thousands of new patients each and every year.

Thousands of warfighters have suffered severe burn wounds and/or other trauma injuries secondary to the increased use of explosive weapons by enemy insurgents in Iraq and Afghanistan. Over 80% of American casualties are transported from Baghdad to Germany with uncontrolled pain. Severe to excruciating pain often continues during the hospitalizations of these noble men and women injured in combat-related duty while serving their country. U.S. warfighters with severe combat injuries, such as burned hands, broken bones and amputations, must undergo frequent wound care sessions as part of their recovery. Combat pain is horrible– indeed, all sub-optimally managed pain is torture. Whether it is the time-honored dose of 10 mg of morphine or the state-of-the-art technology of immersive virtual therapy, successful analgesia reduces pain and suffering while improving outcomes and the patient’s quality of life.

Current pain management techniques often are staid and need both improvement and enhancement. It is easy to see why, when considering the most common pre-hospital pain medication: intramuscular (IM) or intravenous (IV) morphine. IM administration does not lend itself to easy titration, whereas IV titration is more feasible. Both routes of administration require needles and requisite disposal of sharps. These methods also imply a need for exposure of the casualty–a problem in hypothermic trauma victims or soldiers in a tactical and potentially chemical environment. Morphine-induced respiratory and cardiovascular depression can also be especially challenging in this patient cohort which is prone to shock and hemorrhage.

Despite the many challenges in pain management, modern day practices and possibilities are getting better. Available improvements, beyond IM/IV morphine administration, for example, include oral administration of non-steroidal anti inflammatory medications (NSAIDS) and acetaminophen/ paracetamol. These can be bundled into a “combat pill pack,” which incidentally may also include broad spectrum antibiotics such as levofloxacin in an effort to stem infectious risks. Other currently available medications include the fentanyl lollipop, the opioid hydromorphone and racemic ketamine. While ketamine has historically been used mostly in the setting of military/emergency departments, pediatrics and burns, the widespread battlefield or military use of ketamine in recent conflicts may be becoming more mainstream again.

There are also pharmaceutical products in the developmental pipeline that have yet to receive FDA clearance. Transdermal PCA’s utilize iontophoretic principles to maximize drug delivery. Recent technological advancements involving nanotechnology and the “pain vaccine” carry the potential to provide prolonged benefit with analgesic durations lasting from hours to days at a time, without the negative sequelae of opioids. Perhaps the most promising potential medication is S-Ketamine–lauded by many as the next silver bullet in pain control. The Sstereoisomer appears to be more potent than its racemate, and has fewer of the negative side-effects often attributed to the Risomer and the currently FDA-approved form of RS-Ketamine. Given the current human use of S-Ketamine in the European Union, its U.S. introduction may not be far away.

Current pain control considerations even include topical applications such as lidocaine patches for rib fractures. There is not much in the way of rigorously collected scientific data, but there have been several anecdotal accounts of success with this attractive analgesic option for prehospital or combat pain. TENS units and surface ultrasound have also been considered for their analgesic potential. From isolated extremity injury to musculoskeletal pain of the torso, there is a possibility that these are viable alternatives to the staple narcotic regimen still often encountered today. Battlefield acupuncture is yet another alternative. Popularized by U.S. Air Force physician Dr. Richard Niemtzow in 2002, this simple technique requires only minimal training and very small, portable gold needles that barely penetrate the skin and do not require standard sharps disposal (Figure 2). Other advantages include a lower number of adverse effects or contraindications, and not requiring exposure of the casualty. While battlefield acupuncture has been reported to afford analgesia lasting up to three days, even several hours of pain relief are welcome. 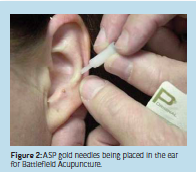 The “Cadillac of pain control” is a phrase often used to describe regional anesthesia techniques. While many peripheral nerve blocks (PNB’s) may not be practical for first responder care or self-aid, they do provide an excellent alternative to conventional multimodal therapy. Often requiring relatively minimal supplies (local anesthetic solution with stimulating needle, nerve stimulator, prep solution and sterile gloves); single shot nerve blocks can afford patients analgesic benefits in excess of 18-24 hours (Figure 3). The main advantages include decreased opioid consumption, decreased nausea and vomiting, increased patient awareness and satisfaction (Figure 4). With military and strategic/tactical considerations, PNB’s offer an alternative that can mean the difference between injured Soldiers ambulating themselves and having to be carried off by two or more fellow Soldiers, a result that further decreases mission effective force or fighting strength. 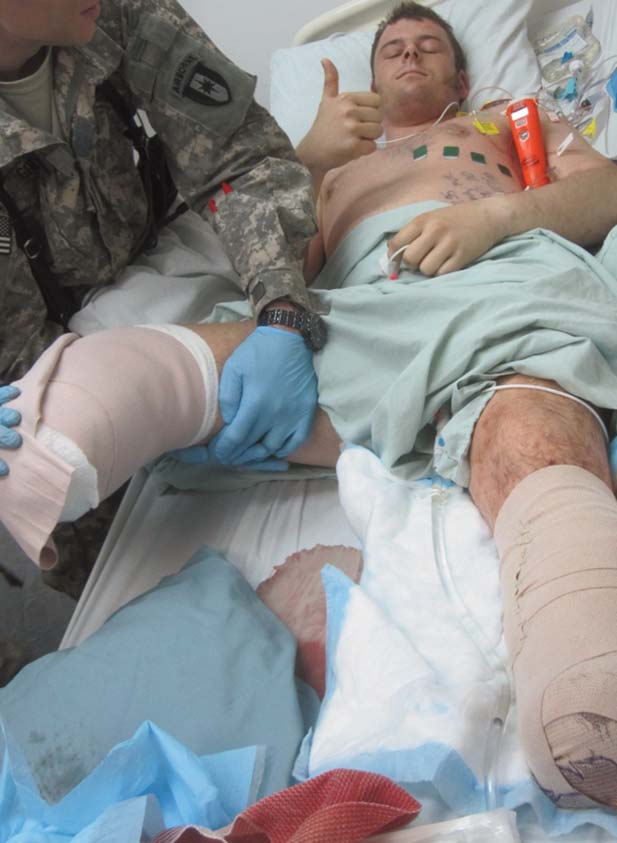 Seemingly a page out of a futuristic science fiction movie, immersive Virtual Reality (iVR) therapy is finding its way into the mainstream management of even the most complicated and severe pain. Long held in regard as the worst pain possible, burn pain appears to respond well to this new technology (Figure 5). Because it uses electronics and not drugs, iVR analgesia does not cloud the patient’s thinking or judgment like narcotic analgesics. By satisfying the military’s request for battlefield interventions which do not cloud the decision-making process, iVR analgesia has a direct impact on functional unit capability and mission accomplishment. This becomes even more critical when air evacuation is involved since patients are often under-medicated in an effort to stave off cardio-respiratory problems. Additional research is needed to confirm the efficacy and expand the availability of iVR not only in the burn and trauma units, but also as far forward on the modern battlefield as possible, e.g., during medical evacuations and eventually even further forward. 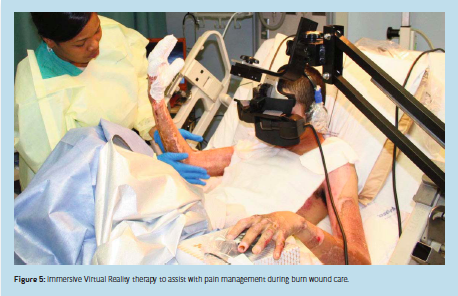 More research and development is needed to study and validate these possibilities. Pain research will continue to light the way for pain clinicians and their patients alike. The interplay of suboptimal pain management and its effects on dayto- day activities cannot be underestimated. Society pays the bill of pain in the currency of work-hours lost, healthcare dollars spent and lives disrupted. Many times these lives are completely uprooted, and entire families are destroyed. The problems these patients and their loved ones face on a daily basis are a reminder of this moral imperative–the need for us to continue our efforts to improve pain management and to provide our patients an escape from the dire consequences of poor pain control.