The concept of Snoezelen, or a sensory environment, was first highlighted by two Dutch scientists working with learning disabilities. The word Snoezelen means “to sniff” and “to doze” in Dutch. The original concept was to use colored paper and light bulbs with tin foil to stimulate all the primary senses to achieve relaxation and calm down agitated clients. It was Pat Schofield who pioneered the use of multisensory environment concepts for individuals with chronic non-malignant pain and his studies resulted in positive outcomes. 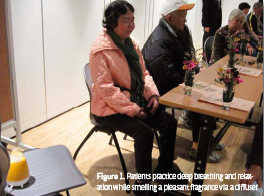 In my recent study of community-dwelling older adults with pain, a multisensory stimulation environment was created, in which our primary senses (hearing, seeing, smell, taste and touch) were gently stimulated. Soft music was played and fragrant lotion given to each participating older person to apply to both hands. They were then asked to close their eyes and practice deep breathing while listening to the music. They were reminded to feel their bodies and smell the fragrant lotion as well as gently massage the acupressure points along their faces, hands, back and legs. They were also asked to smell the essential oil that was distributed by a diffuser. Tea was provided at the end of the session to appeal to the taste buds, and they worked in groups to put together attractive puzzles. All participants showed positive responses to the multisensory stimulation environment and reported lower pain and anxiety scores.

It is hoped that pain will be better controlled in the future via medications and the creation and use of a multisensory stimulation environment as coping strategies.