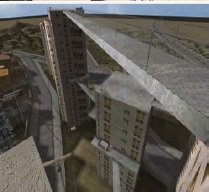 Exposure therapy is a state-of-the art treatment approach for anxiety disorders with a high success rate. During exposure therapy, a patient exposes himself systematically to the feared object (e.g. a dog) or situation (e.g. a height situation) within a therapeutic context. Apart from conventional approaches to anxiety disorder treatment, exposure to real objects or situations (in-vivo exposure) and mental exposure to imagined objects or situations (in-sensu exposure), in virtual reality (VR) exposure has become a third valuable variant.

During VR exposure patients are exposed to virtual environments, which can include any feared stimuli or display any scenario. This approach benefits the treatment of patients whose feared situations are conventionally difficult to recreate under traditional therapeutic conditions.

Despite successes in exposure-based treatment approaches, there is still room for improvement and a need for continuous research. Recently, researchers in the field have started to translate neuroscientific findings into new clinical applications. However, before these approaches can be applied in daily clinical routine, they have to be systematically tested in pre-clinical and clinical studies. Beyond the mentioned clinical benefit of VR exposure, the VR technique has certain features that make VR ideal for this kind of research. For example, the therapist has the opportunity to expose every patient in an identical, uniform manner within the same situations as often as needed; which is essential for the standardization of experimental protocols as needed in pre-clinical and clinical studies. Additionally, the therapist has better possibilities to control unpredicted events that can occur in real environments (e.g. other fearful people) and is able to control the intensity of exposure better.

Therefore, we decided to use the VR technique in our study. We investigated if the combination of exposure with cortisol administration, a steroid hormone naturally produced in the human body during stress, would be beneficial for the treatment of patients with height phobia. For our study we created a semi-structured exposure regime that was adapted to the subjective fear of each participant during each exposure session. Patients with height phobia were exposed in a virtual height environment. Half of the participants had taken cortisol before exposure, and the other half a placebo. Our results showed that all patients profited from the VR exposure, but the group that received the combination of cortisol with VR exposure had a higher treatment success. Our study not only indicates that cortisol has the potential to augment the efficacy of exposure therapy, but also shows that the emergence of new technologies such as VR is in favor to develop new treatment approaches.