A new generation of robots is being created to live among humans and become a nearly ubiquitous part of our day-to-day lives. These robots will be better accepted if they measure up to a certain standard of social interaction and human-like communication, achieving the label of “social robot.” No robot today can fulfill the role of a fully social interactive robot, but new research domains such as human-robot interaction (HRI) are gaining vastly more interest. In this context there is a strong need for robotic platforms that support this HRI research. One specific subclass of HRI focuses on the use of social robots for therapeutic purposes. Based on the positive effects that have been found in Animal Assisted Therapy (ATA), the first robots are being tested for similar purposes (termed RAT – Robot Assisted Therapy). These social pet-type robots are being used for therapy targeting children and elderly patients. 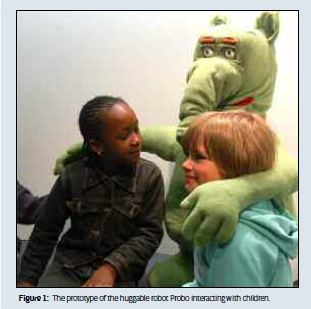 With a special focus on hospitalized children, Probo can contribute to this new research domain. A hospitalization is a serious physical and mental occurrence, especially for children. Besides therapy, Probo can play an important role in the preparation of children to reduce anxiety for medical operations. Reports of the incidence of preoperative anxiety in children have varied over the years but are estimated to effect around 60% of children. Preoperative anxiety in young children undergoing surgery is associated with a more painful postoperative recovery and a higher incidence of sleep disturbances and other problems.

Reduced motivation and drop out are often encountered during therapy for children. However, artificial creatures, games and robots receive a lot of their attention. Recently, a new game concept named “Probogotchi” (Figure 2) has been developed as part of the Probo project. It is a successful game where the user has to keep an artificial creature alive and satisfied through interaction with a stuffed animal with sensors. The idea is to start a CBT relaxation therapy with this game, where this new form of social interaction can play an important motivational factor. This interactive game play builds upon the online CBT treatment for relaxation. Various experiments are now being performed to explore whether this innovative device, Electronic Relaxation Therapy Interface (ERTI), offers advantages over currently utilized therapies.

The robot Probo is an imaginary animal that looks similar to the ancient mammoths. The main aspects are a huggable appearance, an attractive trunk or proboscis, animated ears, eyes, eyebrows, eyelids, mouth, neck, and finally, an interactive belly-screen.

The internal mechanics of the robot are covered with foam and a removable furjacket, in such a way that Probo looks and feels like a stuffed animal. With this approach, choosing an imaginary animal as the basic design, there is no exact similarity with a well-known creature and consequently, there are no specific expectations towards the behavior of this creature as would be the case for a cat or dog. Probo’s purpose is to serve as a multidisciplinary research platform for HRI focused on children. In terms of a social robot, Probo is classified as a social interface supporting non-verbal communication.

Probo’s social skills are thereby limited to a reactive level. To close the gap with higher levels of interaction, an innovative system for shared control with a human operator is introduced. The software architecture defines a modular structure to incorporate all systems into a single control center for the operator named the Robot Control Center (RCC). The robot reacts on basic input stimuli that it perceives during interaction with children. The input stimuli that can be referred to as low-level perceptions are derived from vision analysis, audio analysis, touch analysis and object identification. The stimuli will influence the attention and homeostatic system used to define the robot’s point of attention, current emotional state and corresponding facial expression. The recognition of these facial expressions has been evaluated in various user studies. 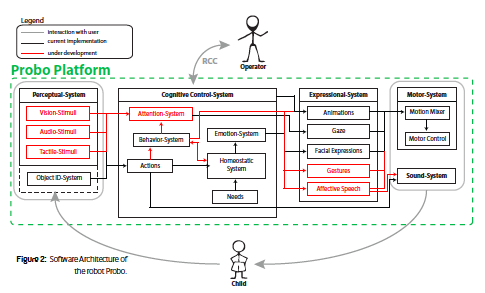 The degrees of freedom (DOF) in Probo’s head are based on the Action Units (AU) defined by the Facial Action Coding System (FACS) developed by Ekman and Friesen. AUs express motion of mimic muscles as 44 kinds of basic operations, with 14 AU to express the six basic emotions – anger, fear, disgust, sadness, happiness, and surprise. In contrast with other robotic heads, a special body part, namely the trunk, is added to intensify certain emotional expressions and to increase interactivity.

Safety is ensured through Probo’s soft body and intrinsic safe actuation systems. To convey the illusion of life in a robotic creature, tools for the creation and management of motion sequences are put into the hands of the operator. All motions generated from operator- triggered systems are combined with the motions originating from the autonomous reactive systems. The resulting motion is subsequently made more smooth and transmitted to the actuation systems. To facilitate interaction with children, Probo has an identity and corresponding history. The name “Probo” is derived from the word proboscidea. Proboscidea is an order that now contains only one family of living animals, Elephantidae or “the elephants.” The history of Probo starts in the Ice Age where he lived among other similar species such as the mammoths and mastodons. For thousands of year he remained frozen under an ice cap in the North Pole, but arrived at Mainland Europe after global warming melted large chunks of ice, setting them adrift in the open sea. Now Probo’s quest is to help children overcome their difficulties and diseases and to make there lives happier and more fulfilling. With future applications to come, Probo is an ideal platform to create a friendly companion for hospitalized children.

← Multisensory Environments and Their Effect on Pain
Tools of Distraction: Video Games vs. Handhelds →
Scroll Up