Exoskeletons have been gaining increasing notoriety in the media for their superhuman strength capabilities on display in several Hollywood blockbuster hits. In the 1986 epic “Aliens,” Captain Ripley used an exoskeleton munitions “Loader” to battle the mother alien and save her crew from certain doom. In the more recent movie “Ironman” released in 2008, Tony Stark builds a fusion-powered armored exoskeleton suit to escape his captors and wreak havoc upon the enemy. However, what many people don’t realize is the vast potential of exoskeletons not so much as super soldiers but as rehabilitation tools in the clinic.

While the real life version of Ironman, the Sarcos XOS-1, is a marvel of modern engineering, it does not actually give the wearer super strength. Like its counterpart in the animal kingdom, the exoskeleton functions as a shell to allow the user to apply higher forces without having to directly bear the load. When coupled with powerful actuators, it may give the appearance of having superhuman strength by allowing the wearer to lift heavier objects than they normally could. But the exoskeleton can actually be regarded as a robot with a human pilot onboard that is commanded by the arm and leg movements of its occupant.

By contrast, rehabilitation exoskeletons are designed specifically to assist (or resist) the movement of the person wearing it. These exoskeletons are attached at various points along the arm or leg so that forces can be applied directly to the limbs. This allows the exoskeleton to move individual joints during therapy, much like a physical therapist would do. Rehabilitation exoskeletons also have the ability to precisely control forces and generate movement in multiple planes, an ability not afforded by standard exercise machines. Moreover, position and force feedback from embedded sensors can be used for quantitative assessment, allowing the patient’s progress to be monitored during therapy.

The Maryland-Georgetown-Army (MGA) Exoskeleton is the result of a collaborative effort between the Georgetown University Medical Center and the University of Maryland to build a portable arm exoskeleton for treating a wide range of injuries. The exoskeleton has six joints (one passive) and weighs approximately 11 kg. Its five powered joints are driven by brushless DC motors coupled to harmonic drives and can provide torque comparable to the average adult male (120 N-m at the shoulder). Three joint axes intersect at the ball-and-socket joint of the shoulder (Figure 1), while a joint mounted on the torso elevates the whole shoulder assembly to replicate “shoulder shrug.” A single pitch joint drives elbow flexion/extension, and a passive forearm roll joint allows forearm supination/pronation. The scapula, upper arm, and forearm links are passively adjustable to accommodate different arm geometries. Force sensors mounted at the upper arm cuff and hand grip provide force feedback to the control system (Figure 2). 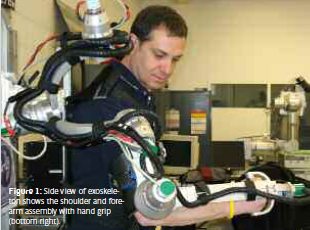 The large range of motion (ROM) and high torque capacity of the exoskeleton enable a wide range of muscle degradations to be treated. A patient with a low muscle grade could thus progress from a passive condition in which he cannot move his own limb, to resistive therapy where he can move his limb against maximum external resistance. Different control modes are used to realize different therapeutic modalities. For example, isometric mode is used for strength assessment once the patient surpasses the passive condition, while isokinetic mode is used to modify resistance over the ROM until the patient has restored almost all normal strength. Isotonic mode is typically used in the latter stages of therapy and for healthy individuals.

Several shoulder rotation exercises were developed to demonstrate the ability of the exoskeleton to replicate standard exercise machines. In these “isolateral” exercises, the exoskeleton constrains the rotation to occur about a single axis, such as about the humerus during internal/external shoulder rotation or the shoulder abduction/adduction axis as shown previously in Figure 1. The graphical interface used to set up the shoulder exercises is shown in Figure 3. The exercise selection is on the left side of the panel, and the mode is at the top. The level of resistance, speed, and range are then selected using sliders. Telemetry such as range of motion and torque level is displayed on the right.

The exoskeleton can also be coupled with Virtual Reality (VR) to create novel rehabilitation protocols for functional training. In this scenario, the patient views a simulated task on a computer graphics display while the exoskeleton provides force feedback to the subject’s arm as it makes “contact” with objects in the virtual environment. Thus, when the patient’s hand pushes against a wall or picks up a bucket in the virtual environment, the exoskeleton will replicate the appropriate reaction forces on the arm. Functional training that emphasizes a sequence and timing of sensorimotor stimuli similar to those encountered in daily tasks has been shown to accelerate recovery from neurological deficits caused by stroke and traumatic brain injury.

A virtual wall-painting task designed to increase reaching ability in subjects with impaired arm movement is shown in Figure 4. In this scenario, the exoskeleton simulates forces exerted by contact with a virtual wall as the subject “paints” with a roller brush. An icon of a paintbrush is drawn on a plain background and tracks the position of the exoskeleton hand grip. Movement of the exoskeleton hand causes movement of the paintbrush in the graphical interface. When the roller makes contact with the wall at a certain force threshold, a green swath is painted along the surface. A bar graph superposed on the wall indicates the level of force to the user who attempts to keep it within a specified range. 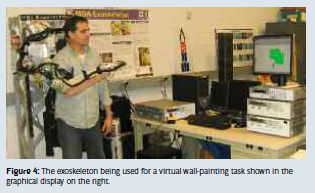 The exercises developed so far only begin to tap the potential of the exoskeleton as an exercise and functional training tool. While the ability to vary the parameters of an exercise at the touch of a button is a powerful feature, the real advantage of the exoskeleton is its ability to execute multi-axis motion with precise levels of resistance which cannot be done on a standard exercise machine. For example, the “empty can” (EC) exercise mimics lifting a can with the hand and pouring out the contents and thus involves rotation about multiple axes of the shoulder. This exercise has been shown to be very effective at rapidly increasing strength following a rotator cuff injury, but therapists are reluctant to prescribe it because improper performance can lead to shoulder impingement. However, the exoskeleton could be easily programmed to guide the arm along the correct trajectory to avoid injury.

Arm exoskeletons designed for treating stroke, Parkinson’s disease, and other neurological conditions are already undergoing clinical trials in several major rehabilitation centers worldwide. While these exoskeletons are not powerful enough to treat orthopedic injuries (typically only 10-20% human strength), they are already making serious inroads as powerful “neuro- rehabilitation” tools. As these exoskeletons gain acceptance in rehabilitation centers, the door will hopefully open for more powerful treatment tools such as the MGA Exoskeleton that can be used to treat musculoskeletal injuries as well.

Acknowledgment: This research was supported by the U.S. Army Telemedicine and Advanced Technology Research Center (TATRC).

← Virtual Reality in the Assessment and Treatment of Eating Disorders
A New Approach to the Management of Metabolic Syndrome: A Telemedicine Initiative →
Scroll Up