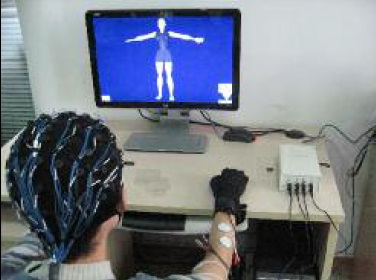 Figure 1: A subject uses a VR system to actively engage in rehabilitation. The combination of VR and Brain-Computer Interface has demonstrated a new future for rehabilitation.

To realize “mind-driven” more effectively, an interactive user interface is essential. Virtual Reality (VR) is one of the best choices for its interactive components and variety, both in motor function restoration and in space and cognitive ability recovery training. First, research indicated that patients could modulate operations, such as moving, grasping and releasing virtual objects, through visual, auditory, tactile and olfactory feedback in virtual environments. Distinct improvements of hand dexterity and movement control ability are detected after training. The movement skills patients picked up in the virtual environments will be retained in the real-life world. Second, a 3D interactive immersive environment provided by VR inspires and maintains training motivation. Last but not least, introduction of VR in rehabilitation helps establish online feedback and real-time quantitative estimation of function restoration.

Currently, Qiushi Academy for Advanced Studies of Zhejiang University (QAAS, Hangzhou China) is building an interactive mind-driven rehabilitation system. In order to achieve the goal of optimal rehabilitation, three components are needed to make the “interactive,” “mind-driven” system fully functional–user intention decoder, interactive environment and actuator. An interactive environment is the key to the system in that it’s the platform where rehabilitation training takes place, the user intention decoder detects the user’s subjective intention and interprets it into control signals and the signals are then fed into the actuator to improve patients performing. QAAS chose to use Brain-Computer Interface (BCI), VR and functional electrical stimulation (FES) as the abovementioned three components respectively. 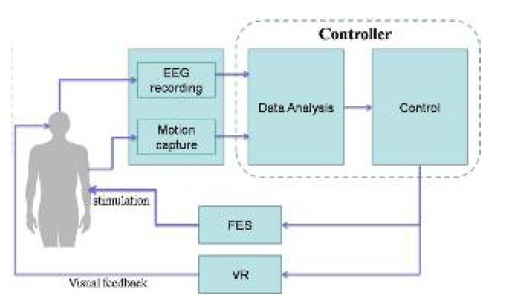 VR as the interactive environment provides two things–one is a supervisor which indicates the training task the user needs to conduct, the other is the realtime feedback of the current status of the body part being trained. The current motion is picked up by sensors in the form of a goneometer, accelerometer, data glove or cameras. A VR platform sends online data of movement status to FES so it can adjust assistant intensity and pattern accordingly. In the meantime, VR records the user’s performance statistics during the whole training session for rehabilitation evaluation. BCI in QAAS’ system is used to detect the user’s movement-related brain signals from scalp Electroencephalogram (EEG). Considering the fact that patients’ EEG could be different from healthy people (especially in the case of stroke-afflicted patients), the BCI is designed to detect not only the EEG components related to motion activity, but also the planning or even mind intention for non-specific movement. The FES system, the actuator, conducts activities initiated by the commands from BCI and adjusted by feedbacks from VR. 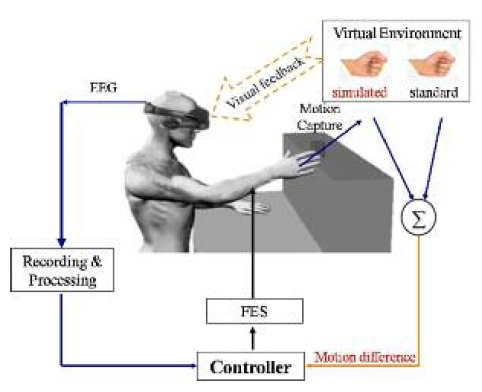 In training, motion targets appear randomly in the VR interface, toward which patients are supposed to move the limb. After the BCI detects that intention, it starts the FES system to assist the limb movement. The interaction loop between VR and FES would insure an accurate adjustment of this movement and help patients reach toward the target. Once the difference between real movement and intended task reaches below a threshold, a round of training is considered to have been accomplished. This process repeats itself during the whole training session.

The ultimate aim of this technology is to enable patients to use their own mind with the help of actuators via enhanced VR to play games, cook, learn and live on their own. The combination of VR and BCI has demonstrated a new future for rehabilitation. With the development of these technologies, rehabilitation training will be more controllable. The famous movie “Matrix” shows us a distant (but not remote) future of BCI. Today we can use VR and some actuator equipments such as FES to realize the wishes of the brain. Patients no longer need to go to hospital for rehabilitation training. Rather they can easily finish all the work at home with the help of a personal computer. Drawing on the advancement of the Internet, people will be able to build a community of virtual rehabilitation online, and those who have unfortunately lost self-care abilities can regain them through interactive mind-driven rehabilitation. VR, BCI and other technologies possess infinite possibilities for rehabilitation.