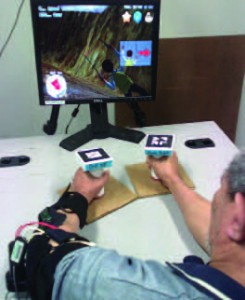 By Sergi Bermúdez i Badia

Every year millions of people suffer a stroke worldwide, and about one third presents chronic motor impairments. The social and economical cost of stroke is becoming unsustainable, and already represents 2-4% of total healthcare costs worldwide. In the context of motor rehabilitation, Virtual Reality (VR) has gained increased visibility in the last few years. VR has become a very powerful tool for motor rehabilitation because it can be used to personalize rehabilitation to the needs of patients.
VR allows altering feedback and enabling users with disabilities to interact with virtual environments in a way that would not be possible in the real world. However, VR motor rehabilitation paradigms should not be the mere computerization or gamification of traditional praxis. Instead, VR training needs to incorporate neuroscientific hypotheses in order to maximize brain plasticity mechanisms responsible for recovery.

VR can be used to provide more direct interventions at the central nervous system level by closing the sense-act loop in a controlled manner, and restoring sensory motor contingencies compromised by stroke. In this way, VR can provide cues for reward and error correction essential for motor adaptation, error feedback and sensorimotor integration networks. Similarly, it enables motor impaired patients to generate meaningful goal oriented motor actions to recruit the neural networks responsible for action recognition, the mirror neurons. In a previous study Cameirão et al. have shown that VR training paradigms that embrace clinical and neuroscientific guidelines lead to improved motor function in stroke patients compared to traditional physical and occupational therapy.

In two recent studies, we have coupled VR motor rehabilitation training and brain imaging technologies – electroencephalography and functional Magnetic Resonance Imaging (fMRI) – to recreate a VR training paradigm with healthy participants in controlled settings. Both studies have shown consistent results pointing towards an increased effectiveness of paradigms based on motor imagery in recruiting motor related brain networks. In particular, the fMRI study by Prochnow et al. has revealed activation in brain regions associated with motor control consistent with those related to the human mirror neuron system. Although these are important findings, at this moment we are still far from fully understanding what the effective ingredients of VR rehabilitation systems are, and what the best way of personalizing rehabilitation protocols in terms of system type, method and dose is. The consequence is that despite numerous technological advantages provided by VR systems we cannot take full advantage of them. Hence, there is an urgent need to continue coupling VR rehabilitation systems with brain imaging technologies to further understand how neuroanatomical determinants, such as lesion size and location, affect motor execution; how the corresponding brain mechanisms underlie recovery; and how to provide optimal rehabilitation strategies for each individual case.