As recently reported by the World Health Organization’s World Health Statistics 2011 that analyzed the health status of 193 countries by measuring over 100 health indicators, chronic non-communicable diseases, such as heart diseases, diabetes and tumors, account for almost two-thirds of global deaths and for 70-80% of healthcare spending.

Metabolic diseases, rising in Western countries as well as in the rest of the world, are a well-known risk factor for cardiovascular diseases and neoplasms. The high prevalence, high incidence, chronicity and long-term implications for health and healthcare costs make diabetes a major concern for the European Union (EU) and the U.S. In particular, diabetes has more than tripled in the U.S. – from 5.6 million to 19.7 million – from 1980 to 2009. However, a major portion of the numerical increase in diabetes is predicted to occur in working-age and older adults in developing countries causing an increasingly large clinical and financial charge in the future. A recent International Diabetes Federation (IDF) report presented the following scenario: a 98% increase, from 12.1 to 23.9 million sufferers, in Africa; a 94% increase, from 26.6 to 51.7 million, in the Middle East and North Africa; a 72% increase, from 58.7 to 101.0 million, in South-East Asia; a 65% increase, from 18.0 to 29.6 million, in Southand Central-America. Therefore, by 2030, the vast majority of individuals with diabetes will reside in developing countries. 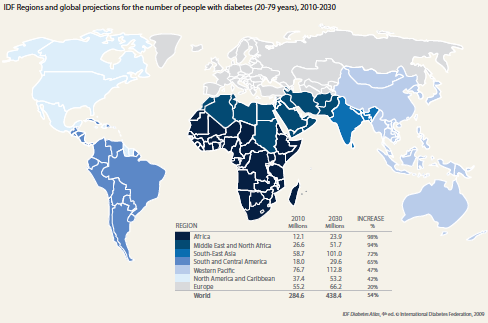 Such an increase in chronicity, associated with population aging, will challenge health service organizations regarding demand of both economic and human resources. This will occur as a countertrend to the short and medium term expected reduction of physicians and health personnel, and of economic resources contingency. A change in how the health and social care system responds to future needs is therefore strongly and quickly required and envisaged.

In this challenging panorama, new e-Health tools and systems promise great improvements in efficiency and encourage new perspectives to address the burden of metabolic and chronic diseases.

• Prevention to reduce the incidence and progression of the disease and its associated complications and co-morbidities.

• Early detection and early treatment, which can improve health outcomes.

• Integration and continuity of prevention and care.

Diet, obesity, and lack of physical activity are contributing factors in contracting a metabolic disease. Change in lifestyle has crucial effects in prevention through a correct understanding of the disease including risk factors and co-morbidities. Diabetes often goes undiagnosed because many of its symptoms seem so harmless. New instruments like an educational portal, diabetes risk test, and interactive educational games can increase people’s sensitivity to the problem and lead to early detection of diabetes symptoms and consequently, to early diagnosis and treatment.

Innovative chronic care management programs emphasize the patient’s central role in self-managing their own healthcare, but including it in a wider strategy of integrated disease management that, with the support of technology, allows effective care coordination.

Four principal orientations towards diabetes and its management were identified: resisters, identity resisters, consequence accepters, identity accepters, and consequence resisters and accepters. Therefore, people with diabetes have varying orientation and preferences towards forms of both education and self-management which have been identified and should be taken into account. Diabetics should take an active role in their care plan, in a sort of therapeutic complicity as a personalized alliance between the patient and the diabetes care team. The care plan should include a program of diabetes self-management education (DSME), which guarantees, through the use of different strategies and techniques, appropriate education on how to solve problems connected with the management of the disease. The self-monitoring of blood glucose (SMBG), shared with the diabetes team, is an indispensable component of the management of diabetes.

Recent exciting research foresees applications in Virtual Reality (VR) technologies (human interaction with computer-simulated environments) having a possible impact on healthcare even greater than that offered by the new communication technologies, broadening its use to the management of patients affected by metabolic diseases. VR was first developed and applied to surgical procedures (robotics, technical training, treatment from remote sites), and was subsequently extended to the fields of rehabilitation (cerebrovascular and Parkinson’s disease) and psychology (substance abuse disorders and behavioral medicine). Some investigators have recently qualitatively evaluated how interactive games can promote behavior change in prevention, treatment indication and selfmanagement for people newly diagnosed with type 2 diabetes. Other researchers evaluated the efficacy of “alternative reality” games in promoting healthy eating and exercise using sensors dedicated to measuring heart rate and other devices. Finally, VR is expected to induce sustainable behavior change implementing therapeutic guidance on the optimal diet and physical activity for weight control, and adherence to therapy linking visual and other sensory aspects of food and exercise with the patient’s cognitive and emotional states.

The scientific community’s support for the use of VR technologies in the education of metabolic patients is rising, as testified by the grant’s call recently published by the National Institute of Health. The potential areas for hypothesis-testing and developmental research are expanding, and hopefully leading, in the near future, to new methods and technologies.