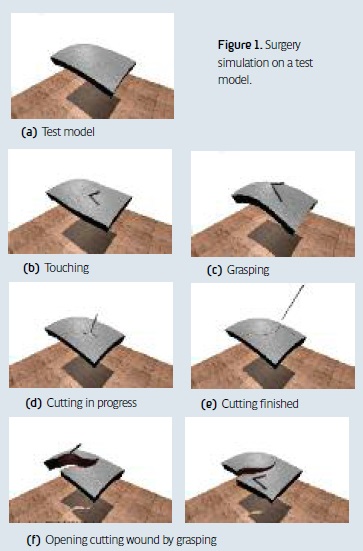 We have developed a surgery simulation software system using C++. The system is composed of several modules, including user interface, a graphics renderer, haptic device manager, collision detection, deformation calculation, cutting tool, touching and grasping tool. The system is designed to be multi- threaded, and thus can take advantage of multi-CPU or multi-core CPU. Graphics rendering is implemented using OpenGL 2.0 with GLSL shaders and currently PHANToM haptic devices from SensAble Technologies are supported using GHOST SDK. The haptic update loop is implemented in a separate thread to decouple it from collision detection and deformation calculation.

To facilitate algorithm implementation, we designed a sophisticated data structure to store geometrical, topological and mechanical information of a target object. The object is represented by tetrahedral mesh. The mesh is composed of vertices, edges, triangular faces and tetrahedrons. Each element has relational information about its neighboring elements. For example, each edge has two pointers pointing to its two vertices and a list of pointers pointing to tetrahedrons that contain this edge. Each tetrahedron also stores mechanical properties such as density, Young’s modulus and Poisson’s ratio.

Detecting collisions between surgical tools and the target object is the first step of interaction. We use AABB tree for the target object. Since the object can deform, the AABB tree needs to be updated in real-time. To reduce computational cost, a top-down updating algorithm is implemented. Each AABB is enlarged by a small amount so that updating is not needed if all the vertices still lie within its bound. The touching and grasping tool is treated as a point while the cutting tool is treated as a line segment. Once collision is detected, the penetration depth is used for calculating interaction force. This force is applied to the object surface for deformation while the opposite force is sent to the haptic device. For the cutting tool, the cutting process begins once the interaction force exceeds a certain limit, and an alternative neighboring search algorithm using spatial coherence is used for collision detection instead of AABB tree.

Target objects in surgery simulation are usually human tissues and organs. These objects deform considerably under external force, and are thus referred to as “deformable objects.” Simulating deformation of deformable objects is what differentiates surgery simulation from other virtual reality applications involving only rigid bodies. Deformation calculation usually consumes a large amount of computational time, so efficient algorithms and implementations are essential to meet real-time requirements. We implement two deformation algorithms, both based on the Finite Element Method. One algorithm pre-computes deformation modes under unit force vectors and uses super-position to calculate displacements of vertices under external forces. The other algorithm is based on a tensor-mass model. The stiffness matrix is distributed to vertices and edges as tensors while the mass of each tetrahedron is distributed to its vertices. The algorithm dynamically calculates changes of velocities and positions of vertices and is computationally more intensive, but does not need pre-computation.

Our future research will focus on the following aspects: