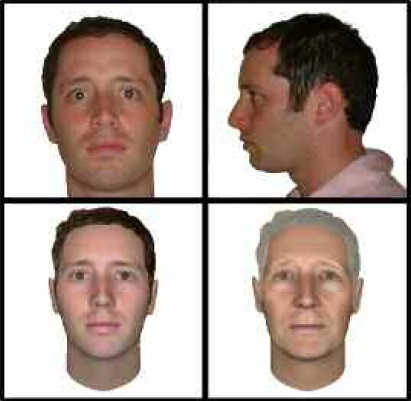 Figure 2: A participant’s photographs (top) are used to create a virtual doppelgänger (bottom left), which can be aged (bottom right) or otherwise transformed to achieve health outcomes

You don’t like parties: there are too many people and it makes you anxious. Who do you talk to? What do you do? As your eyes scan the virtual party environment, you notice a familiar face across the room. It’s you. There you are, chatting with a group of three strangers. You’re making eye contact, nodding, laughing even. Wow, you’re really having a good time.

Doppelgängers are virtual humans created using photographs of the participant so that they are realistic and bear a strong resemblance to the self. According to Bandura’s social cognitive theory, greater similarity and identification with a model leads to more social learning and imitation of modeled behaviors. Consequently, doppelgängers, which are maximally similar to the self, have many advantages over traditional models. Additionally, this virtual self can be programmed to behave independently of the physical self, maximizing its utility as a persuasive agent.

Our first series of studies addressed whether or not these doppelgängers could be used to promote exercise. Findings across five separate studies demonstrated a doppelgänger who gained and lost weight in accordance with the physical actions of a participant in the lab caused real changes in physical behavior. Compared to various control conditions, watching one’s doppelgänger lose weight as a reward for activity or gain weight as a punishment for inactivity caused more exercise. This change in health behavior was observed immediately after the treatment in the lab as well as twenty-four hours afterwards.

A similar technique can be used to change eating habits. We had participants observe their doppelgängers eating, and afterwards they responded to survey questions while seated at a desk with a large bowl of candy. We observed a replication of social facilitation effects on eating, wherein men consumed more candy and women suppressed their appetites, eating no candy after the virtual treatment. These studies suggest that doppelgängers may be used for the treatment of obesity, compulsive eating, or eating disorders and could be incorporated in existing diet-based virtual environments (VEs).

Given our success in modifying exercise, diet, and financial behaviors, we feel that doppelgängers should be explored more widely within the fields of therapy and rehabilitation.

Bandura originally used social modeling as a method of phobia desensitization, and virtual reality exposure therapy has been successfully used for this purpose. Doppelgängers could be incorporated in VEs for acrophobia (the fear of heights), agoraphobia (fear of open spaces), aviophobia (fear of flying), or social phobia. Participants could see their doppelgängers coping with stressful environments, thus bolstering their sense of self-efficacy. They may also observe their virtual self experiencing the rewards associated with successful phobia management, which may serve as an additional incentive to work towards managing the phobia.

Physical rehabilitation VEs present another use for doppelgängers. Although many embody a first-person perspective, some physical movements may be better learned from a third-person perspective. In these cases, incorporating a doppelgänger as a model may promote more self-efficacy and learning.

Doppelgängers have shown great potential for changing physical behaviors. Much work in cybertherapy successfully implements a first person, real-time controlled avatar view during therapy. These researchers should consider the potential of incorporating autonomously behaving doppelgängers in their treatments.