➣ By Thomas B. Talbot 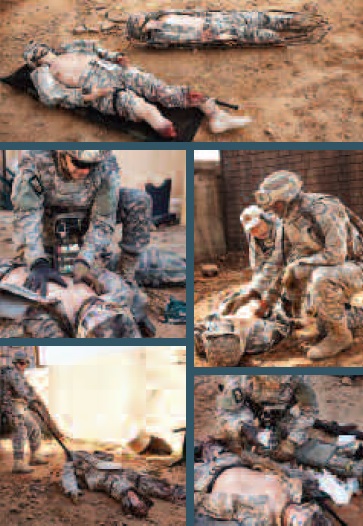 The Telemedicine and Advanced Technology Research Center (TATRC), the Army’s high-technology medical pathfinder, has been intensifying advances in wartime trauma training through the use of advanced, and sometimes unexpected, approaches.

One of the most successful research and development efforts to date has been the COMETS manikin, designed from the ground up to be fully autonomous, ruggedized and purposed for trauma. COMETS was designed and developed by the CIMIT Simulation Group, led by Dr. Steve Dawson, and a team of researchers at Massachusetts General Hospital. The COMETS prototype was extremely successful and has been commercialized by defense giant CAE, renaming it CAESAR.

Other work sponsored by TATRC involves game-based approaches to training. One example is a computer game for combat medics who must respond to an improvised explosive device (IED) event. To encourage innovation, separate awards were made to both SimQuest and MYMIC, both leading medical game developers. The SimQuest version focuses on simplified patient encounters and triaging a large number of casualties, while the MYMIC game gets into more detail with fewer casualties.

Regarding the games’ approach, Harvey Magee, TATRC medsim technical director explains, “We wanted to focus on training higher order thinking skills. Games are a great format to do this because they allow learners to try new things and take risks. As sponsors, we sometimes maximize innovation by going with parallel approaches to see what the different developer teams come up with.”

Since 2009, TATRC has led a tri-service team with $250 million in funding over five years and has established the Armed Forces Simulation Institute for Medicine (AFSIM). It is hoped that much greater funding and an all-military approach will achieve breakthrough gains in medical training. The first fruits of this effort have been the Combat Casualty Training Consortia, two independent teams that are to conduct the largest comparisons between animals and simulators for trauma training to date. It is hoped that the research will identify areas where technology can replace animals in training and identify specific areas where technology needs improvement.

The AFSIM has continued the TATRC gaming tradition with three game-based approaches in 2010; one for anesthesia training, one using Microsoft Kinect™ for physical therapy, and another for mass casualty exercises. The mass casualty game, CBRNE GAME by Breakaway LTD, is designed to be an online multiplayer real-time strategy simulation with large numbers of casualties flooding a hospital from both weapons of mass destruction and explosive device incidents. The training will focus on teamwork, resources and judgment.

Future plans to improve trauma training are on an aggressive schedule. There is a significant focus on developing interactive virtual human personalities that employ a natural language interface and are capable of sustained conversations. Initial uses will include virtual human coaches for patients and virtual standardized patients for training. Eventually, the personality agents will be integrated into advanced training robots and intelligent talking task trainers. The intent is to overcome the artificial sensation of training on something that the trainer may see as a hunk of plastic. Future simulators will more convincingly emulate interactions of a real human casualty.

The fact that combat injuries are often bloody, disfiguring and grotesque takes a toll on people who care for the injured. Researchers are also asking if trauma training can be conducted in a way that improves the psychological resilience of the medical force. Current research also includes an investigation into the sense of smell and how it contributes to the formation of traumatic memories. Future efforts will tap into promising results from Virtual Reality (VR) therapy and employ more gamebased simulations and VR environments.

Additional details of current research and future plans are available at http://www.tatrc.org/ports _medSim.html.