According to Statistics Netherlands, functional limitations of the elderly can be categorized into four groups, namely hearing, seeing, mobility and speaking. Mobility problems are by far the most prominent limitation for the elderly, and this problem increases significantly with age. Fourteen percent of men above 65 and 33% of women over 65 have mobility problems. Within the age group of 75 and over, these percentages are higher with 23% of men and nearly 50% of women affected.

The general advice to elderly with mobility limitations is to stay active as much as possible. Nevertheless, there are numerous scenarios in which their independence would strongly increase if a robot is around to assist. Such a robot, for example, could perform fetch-and-carry tasks in order to tidy up the floor and other surfaces, or handing objects such as a phone, remote control, food, or drink to the elderly person.

The feasibility of fetch-and-carry robots has already been demonstrated by mounting an intuitive point-and-click interface on a mobile robot with a robotic arm. A typical example of such a fetch-and-carry robot is provided by the Delft Personal Robot (see Fig. 1). For large-scale usage of a robot like this the robot design should be low-cost and support grasp adaptivity required for long-term operations in an environment with a broad variety of objects. The Delft Personal Robot is able to fetch, carry, and hand over objects with a variety of shapes such as towels, paper cups, phones, etc. 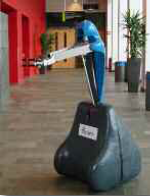 Fetch-and-carry robots will operate in an environment surrounded by elderly people that are novice users of such technology. Apart from operating effectively and safely, it is very important that the interaction between the robot and the user is intuitive and feels natural. This means the robot must be able to understand and follow commands, as well as be able to respond to various forms of spontaneously communicated positive and negative user feedback concerning performance of the robot. This requires that the robot is able to interpret explicit and implicit feedback signals provided via body language (pointing, nodding, shaking), emotional expressions (frowning, smiling), and affective speech (no, yes, good job, nice robot) by a human. This natural communication often involves a component of emotion. Therefore, future service robots and fetch-and-carry robots in particular, need to be social robots that will be accepted and usable in long term scenarios. Experiments have demonstrated that social functions of robots are very important in elderly care settings.

A recent exhaustive review of assistive social robots showed that, although there are promising results, much work still has to be done. A large number of studies show positive effects of either the robot or its placebo version. Furthermore, the elderly seem to be open to this kind of technology. The review provides several observations and recommendations that need follow-up. In summary, it states that largescale experiments are needed that are rigorously set up, and an adequate methodology is needed to perform such studies and to compare them. Setting up large scale, national and international European programs to establish the merits of these, and related, assistive social devices, is of great importance for the elderly, as well as for technology-assisted healthcare.).

← Telegenetics: A Systematic Review of Telemedicine in Genetics Services
Do Affects Affect you or do you Affect Affects?: A Closed-loop in Positive Technology →
Scroll Up