Statistics from the Second China National Sample Survey on Disability indicated that China’s population contained nearly 83 million disabled people in 2006. In contrast to the figure is the underdeveloped infrastructure and social services. Only 23.3% of disabled people can get rehabilitation treatment and most of them still have to suffer from great amounts of pain–both physically and psychologically. There is a heightened need for an increase in effective rehabilitation systems in China.

The related technologies of computer graphics and virtual reality (VR) have been thriving for the past thirty years. In the last decade, with the rapid growth of processor speed and storage capacity, VR and related technologies have been widely used in education, manufacturing, pilot training, medicine, entertainment and other areas worldwide. In China, administrative departments, universities and companies have all seen the possibilities and advantages VR possesses and begun to promote the use of the VR in many areas, including the treatment and rehabilitation of disabled people. However, unlike the wide usage of VR in the U.S. and Europe, its application in China is still at the very beginning stage.

The Qiushi Academy for Advanced Studies (QAAS), Zhejiang University, was founded in 2006. It is an interdisciplinary research center with students and researchers from bio-engineering, computer science, clinical medicine and material science. It is one of China’s pioneers in promoting VR technology in rehabilitation. The main research interest of QAAS includes brain-computer interfaces, neural interfaces, neural signal processing and mathematical modeling, human-computer interaction, and ubiquitous computing, among others. They have also performed a large amount of research on implanted neural interfaces. Currently, drawing on the solid work Zhejiang University has done in computer graphics and VR, QAAS is exploring the possibilities of using virtual or mixed reality for physical and psychological treatment and rehabilitation, and to integration of these technologies to build innovative technical aids for the disabled to help restore their daily functions.

Many other universities and research institutes, such as the University of Electronic Science and Technology of China, Huazhong University of Science and Technology, Fudan University, East China Normal University and Tsinghua University have also realized the prospect of VR and mixed reality-based rehabilitation and have begun to investigate the possible usage of the technologies in related applications. The different aspects of VR or mixed reality used for rehabilitation include the application of cognitive treatment, orthopedics, stroke rehabilitation, psychological treatment and braincomputer interfacebased training, many of which are still far from clinical or practical application.

The National Science Foundation of China provides funding for hundreds of domestic projects and international exchange and cooperation programs. This provides many opportunities for Chinese institutes and universities to participate in international collaborations, not only to fund their research work but to disseminate and globalize their studies as well. 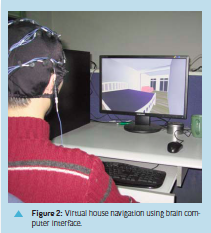 During recent years, the connections between China and the rest of the world, including Europe, North America, Japan and Australia, have improved drastically. The overseas funding not only helps to support the institutes and researchers in continuing their work, but also provides a possibility to collaborate with international scientists and research groups standing at the forefront of their fields. Researchers and institutes in China will benefit from the opportunities for future advancement in science and technology. During the past two years, QAAS, for example, has established broad links with top laboratories in the U.S., Italy, Switzerland and other countries, for research and academic cooperation in joint research proposal writing, as well as student and scholar exchanges. The effective collaboration between QAAS and the leading foreign research institutes not only broadens the view, but advances its research and development of VR or mixed reality-based rehabilitation. Just in the last few years, QAAS has become one of the leading laboratories in China in these related fields.

← Will the EU Do a Better Job Than the U.S. in Funding Women and Small Businesses in Health Technology?
Activating Motor Cortex by Means of Virtual Tools →
Scroll Up