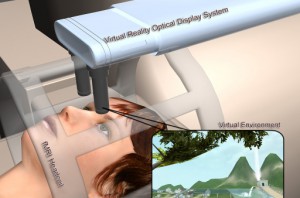 Since the introduction of functional magnetic resonance imaging (fMRI) over two decades ago, MRI research and demand have boomed. With the newfound ability to map brain functionality using MR technology in real time, it became possible to connect people’s subjective thoughts and emotions with an objective understanding of brain activity.

fMRI has since found a home in a variety of clinical and research areas, from drug addiction and alcohol and smoking cessation to stroke and brain injury. In 2010, the global MRI market was valued at $5.5 billion and is expected to grow to $7.5 billion by 2015. Researchers around the world are exploring methods of improving fMRI functionality and exploring other areas of application of this powerful technology.

One of the prominent uses of fMRI has been to study the effects on brain activity of virtual reality (VR), a technology that has had recent utilization in a wide variety of clinical settings. fMRI technology now opens up new possibilities to understand how this illusion of presence in a virtual environment causes changes in the brain. However, there have been many obstacles barring this application. An immersive virtual reality system requires a series of equipment and environmental constraints that an fMRI magnet bore typically cannot accommodate. Effective immersion usually requires head-tracking sensors, a headmounted display, a surround sound system, and an input device to navigate the environment. When one imagines an MRI scanner, it is easy to see where its physical constraints prevent the use of such equipment. During an MRI scan, patients are lying inside a magnet tube, unable to move their head, frequently distracted by the claustrophobic environment. Without the feeling of presence and immersion into the virtual environment, researchers are finding it difficult to utilize fMRI technology to study the effects of virtual reality.

One of the first attempts to study changes in mental activities from the use of VR occurred at the University of Washington. To overcome the physical constraints of a MRI scanner, the team of researchers developed a custom display that fits into the MR head coil, capable of projecting wide field-of-view images using nonconductive and nonferrous materials (Figure 1). They guided seven subjects through a virtual snowy environment while placed in an MRI scanner. Each subject reported experiencing strong illusion of presence despite lying down in an enclosed environment.

Moreover, the research team successfully acquired brain scan images that were not obstructed by the VR image system, demonstrating the capability of visually analyzing effects of virtual reality on brain activity.

VR has seen interesting applications in areas such as stroke rehabilitation. Stroke patients may experience weakness or paralysis of limbs and must undergo physical rehabilitation to regain control. VR has been proven to be an interactive and enjoyable intervention method to improve upper extremity motor function, however, the neural mechanisms supporting its use has only been recently investigated. Following the development of fMRI compatible VR delivery systems, researchers from Yeungham University and Sungkyunkwan University in Korea and Hampton University in the United States conducted an experimenter-blind randomized study of ten chronic stroke patients that resulted in interesting brain activity pre- and post-VR. Among the movements of brain activity, the study found that cortical activation was reorganized before VR, from ipsilateral activation, and after VR, to contralateral activation (Figure 2). Overall, it was shown that VR contributed to positive changes in neural organization and was one of the pioneering studies that explored the effectiveness of VR in neurorehabilitations. 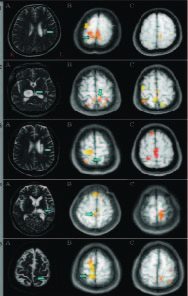 Another prominent area of virtual reality and neuroscience research is that of smoking craving. To combat the effects of nicotine, many smoking cessation programs use cue exposure therapy, a method that bombards patients with common smoking-related cues to desensitize their urge to smoke. Despite extensive behavioral studies on cue effects, few have explored its effects on brain activity. Jang-Han Lee et. al. utilized fMRI to conduct a pilot study to test whether smokers could experience response to smoking cues during an MR scan and investigated the corresponding activity in the brain. He confirmed his hypothesis that smokers do experience greater craving as suggested by activation of the prefrontal cortex, anterior cingulate cortex, supplementary motor area, inferior temporal cortex, and the occipital lobe when smokers viewed cues in the 2D virtual environment (Figure 3a). Interestingly, the experiment showed that similar, but not all, regions were engaged in a 3D virtual environment (Figure 3b). In the 3D world, the prefrontal cortex and cerebellum were activated, presumably in response to the required attention and visual balance required in a 3D environment. 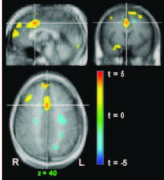 Figure 3a: Response to a 2D environment with activation of anterior cingulate gyrus 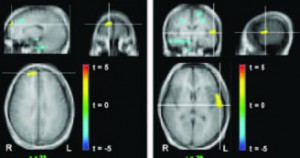 As interest quickly climbed in the world of virtual reality, the challenge of improving its effectiveness arose. Research suggests that results of VR therapy improves as the VR experience becomes more immersive. To better understand the neural mechanisms behind this trend, Joseph Andreano et. al., conducted a study to explore one of the fundamental methods of altering immersion levels by comparing brain activity while using unimodal VR (only visual stimulation) and multimodal VR (with auditory and visual stimulation).

As expected, he found that there is substantial response to immersion in virtual environments as compared to rest, particularly in regions associated with visual and auditory stimulation such as primary visual and auditory cortices, fusiform cortex, and amygdala (Figure 4). More interestingly, results showed that in the multimodal environment, several brain regions not engaged in the unimodal VR were activated. The primary visual cortex, inferior temporal cortex, and part of the ventral visual stream, regions not associated with audition, were highlighted. Parietal somatosensory areas and bilaterial clusters in the hippocampus were engaged as well. These results seem to indicate that immersion in a virtual environment activates higher cognitive processes, particularly those related to memory.

Figure 4: Activations of visual cortex and hippocampus in response to audio stimulation compared to presentation without.

At first, fMRI and virtual reality were incompatible. But the allure of the vast knowledge that could be gained has motivated researchers to bring these two worlds together. After it was shown that it is possible to successfully deliver immersive virtual worlds in an MRI scan, fMRI and VR have gone hand-in-hand. Previous applications of VR in therapy and rehabilitation that were previously heavily studied in behavioral and psychological manners could now be explored from a neuroscience point of view. As more experiments are conducted on the subject, the elusive concepts behind the brain can be studied in a reliable, flexible, and experimental manner using virtual reality.