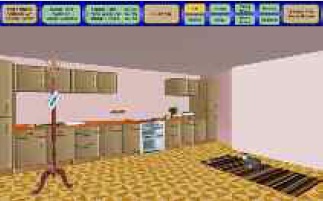 Screenshot of the virtual kitchen environment.

In 1998, researchers from the University of East London pointed to studies indicating that hospitalization following brain damage is often characterized by long periods of inactivity where the patient has minimal stimulation and interaction with their immediate environment. It was argued that such conditions were akin to environmental impoverishment, which is deemed to be deleterious to recovery from brain damage. The authors argued that Virtual Reality (VR) could be used to reduce such long periods of inactivity and, in doing so, raise the levels of cerebral activation and arousal upon which the success of subsequent rehabilitative attempts rest.

The intervening twelve years of research has witnessed much progress in examining the utility of VR in numerous specific domains of neuropsychological assessment and rehabilitation (attention, memory, and executive function). However, it is the contention of this short article that researchers have missed arguably the greatest single contribution that VR could make to brain damage rehabilitation: simply improving the environment that the patient is exposed to between formal rehabilitation sessions.

Recovering from Brain Damage: the Role of the Recovery Environment

In terms of the rehabilitation of human brain damage, consider that research has indicated that patients can spend as little as an hour a day in formal rehabilitation and a significant proportion of the remainder of the day not engaged with activities, social interaction, or their immediate environment. Such conditions can be conceptualized as an impoverished envir o n m e n t . Researchers have argued that low levels of cerebral activation and arousal associated with impoverished recovery environments essentially handicap any rehabilitative strategies from the outset – the patient is very easily fatigued and unaccustomed to having to concentrate and allocate their attention resources to different tasks. In other words, raising levels of cerebral activation/arousal is a pre-requisite for optimally effective rehabilitation following brain damage and environmental enrichment is the obvious means to achieve this.

In contemplating the use of environmental enrichment in the rehabilitation of brain damage in humans, it should be noted that no direct extrapolation from the animal research to humans is being advocated. The authors simply suggest that the volume and breadth of the animal literature should constitute strong impetus to conduct enrichment research in human populations and serve as a means of identifying practical, conceptual and methodological issues associated with how enrichment might be implemented with humans.

The first and most obvious barrier to implementing enriched environments in human populations is economic. Given constraints on budget, time, and resources, in addition to limitations imposed by health and safety concerns, it is very difficult to modify the physical environment of a hospital ward, or physically transport a patient to a less impoverished environment. However, if one cannot take the patient to an enriched environment in the real world, then we can bring an enriched virtual environment to the patient. This could be achieved with something as simple as a laptop PC based VR set up. Such a system could potentially eliminate all of the practical constraints that have inhibited the development of a body of research on the use of enriched environments in human populations. One might go so far as to suggest that this simple idea might well be VR’s “silver bullet” – the application that finally exploits the real potential of the technology in the context of neuropsychological rehabilitation.

Issues with the Implementation of Enriched Virtual Environments

VR may well be able to overcome the practical issues associated with the provision of enriched environments. However, there are also theoretical and methodological issues to consider. A full review of these issues is beyond the scope of this paper, but the most fundamental one will be briefly addressed here. The issue of what constitutes an enriched environment for human populations, as opposed to the rodent based populations the research has predominantly been conducted on in the past.

Any meaningful research rests on the specification of parameters that differentiate an enriched environment from a standard rehabilitation environment. In broad terms, perhaps suggesting that the factors that distinguish enriched and standard environments in rodent based research constitute appropriate initial parameters for the manipulation of enrichment in humans is not stretching credulity too far. The significance of these factors within brain damage rehabilitation is not based purely on speculation. For example, research has pointed to the importance of physical exercise, social interaction and multi-sensory information on the recovery of both motor and cognitive functions in addition to cerebral reorganization. As a brief glance through any VR related publication will attest, the characteristics of VR are amenable to creating a diverse range of virtual environments highly relevant to patients’ daily lives. The characteristics can be orientated to support exercise programs, utilize several sensory modalities, provide automated rudimentary social interaction, or serve as a forum for real time social interaction (e.g. Second life).

Using VR to enrich the environments of people with brain damage is a topic far too large to entertain fully in this article. However, it is fair to say that enriched virtual environments in neuropsychological rehabilitation hold the promise of enhancing recovery from brain damage at very little financial cost and with minimal risk. This idea was originally proposed over a decade ago – the authors would argue that it is high time to make serious in-roads into this area of research.