Smartphones are increasingly being used as handheld computers rather than mere phones due to their powerful onboard computing capability, capacious memories, large color screens, and open operating systems that encourage application development. A Morgan Stanley presentation published in 2010 is predicting that mobile Web access via smartphones and other small form factor Internet devices, such as the iPad and clones of small touch-screen tablets, will overtake conventional desktop Internet use by 2015. Smartphones are rapidly and radically transforming healthcare, enabling it to become more mobile at the point of need and more participatory by engaging all involved stakeholders, including patients, non-clinical caregivers, the general public, clinicians and various organizations. The role that smartphones can play in the care of patients with a long-term condition such as diabetes has been the subject of many published papers in the peer reviewed research literature ever since the early days of smartphone precursors, the basic mobile phones, with limited monochrome screens and basic Short Message Service (SMS) and Wireless Access Protocol (WAP) Web access capabilities, which were featured in research projects such as the European-funded M2DM-Multi-Access Services for telematic Management of Diabetes Mellitus project (2000-2002). Today, one can easily find hundreds of diabetes-related apps (smartphone applications) in the different smartphone app stores for the major smartphone platforms that are currently available, namely the iPhone, Android and Blackberry, Nokia Ovi and Windows Phone 7 (Figure 1). The potential of many of these apps in reducing healthcare costs and improving clinical outcomes is huge. 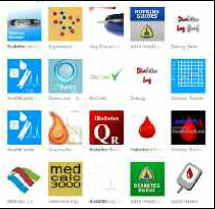 Figure 1: The colorful icons of some diabetes-related
apps available for Windows Phone 7 in the Windows
Phone Marketplace.

One of the most popular smartphone apps for diabetes care and management is the WaveSense Diabetes Manager, a free iPhone app from AgaMatrix. The app can track a diabetic user’s glucose results, carbohydrate intake, and insulin doses. The WaveSense Diabetes Manager helps the user quickly enter his/her information, review the data with convenient color-coded charts and graphs (Figure 2), and gain a new perspective on his/her diabetes management. The user is also able to watch educational videos from within the app to learn about healthy eating, lifestyle choices, and hear from others who are living with diabetes. Second opinion is “one E-mail away,” as the app offers an option to E-mail results to the user’s trusted healthcare team. The main functions and features of the app include:

• The user can put his/her glucose results in context by adding tags about food, exercise, medicine, or health issues (tagging);

• Color-coded results enabling the user to easily spot when he/she goes into high or low ranges;

• A function to E-mail diabetes information to the user’s family and trusted healthcare team for review (E-mail reports). The user has full control over what gets sent, to whom, and when. 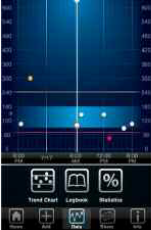 Connecting a Glucometer to the iPhone

Another closely related device that can also connect to the WaveSense Diabetes Manager app and automatically upload data to it, is the recently announced (September 2010) ultra-compact “iBGStar Plug-In Glucose Meter for the iPhone,” co-developed by AgaMatrix and Sanofiaventis. Like the WaveSense Direct Connect Cable, the iBGStar Plug-In Glucose Meter is not yet available on the market as of May 2011.

The WaveSense Diabetes Manager app only runs on the iPhone platform. Porting apps to other platforms such as Windows Phone 7 and Android is not a trivial task and can prove costly for app developers. Cross-platform coding is currently most successful for mobile Web apps (apps that run in smartphone Web browsers and/or are using Java for Mobile Devices, and are thus generally smartphone- platform-neutral), which can partly solve this developer’s “platform dilemma.” However, Web apps can sometimes prove a bit restrictive (in what they can be coded to do) compared to the functionalities that can be implemented in native apps (apps designed for a specific smartphone operating system and CPU—Central Processing Unit). A good example of a diabetes-related Web app for all smartphone platforms is Handy- Logs Sugar. Nevertheless, a Web app can still do many things and with the emerging cross-platform app creation services such as Conduit Mobile, the task of creating such apps is becoming much easier than ever before.

A Glimpse into the Future of Smartphones

While smartphones are already “light years ahead” of conventional desktop computers in terms of mobility, the coming years are expected to carry further innovations in this respect, with smartphones becoming even more mobile, lighter, thinner, and, hopefully, smarter with the help of technologies such as cloud (server-side) computing. Technophile readers unable to wait and eager to see this happen can have a glimpse into what the next generations of smartphones might look like by watching the thin-film, flexible “paperphone” prototype video and photos at http://tinyurl.com/3pvapxs.