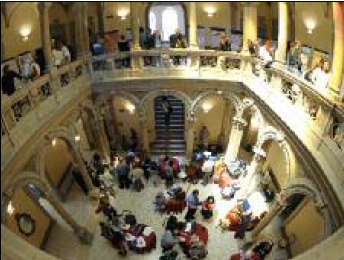 The main hall of the Villa Caramora (ground floor) and the the poster exibition (first floor).

The 14th Annual CyberTherapy & CyberPsychology Conference (CT14) co-organized by Professor Brenda K. Wiederhold from the Interactive Media Institute and Professor Giuseppe Riva of the Istituto Auxologico Italiano, took place in June 2009 in Verbania, a picturesque location on Lago Maggiore, Italy. CT14 was hosted in Villa Caramora, a historical building owned by Istituto Auxologico Italiano, and attracted researchers from 27 countries around the world. According to Alessandra Gorini, the Conference Coordinator, “it was a great international success that brought together researchers, clinicians, policy makers and funding agents to share and discuss advancements in the growing disciplines of cyberpsychology, cybertherapy, training and rehabilitation.”

Under the direction of Professor Stéphane Bouchard, Workshop Chair, CT14 kicked off with pre-conference workshops on Sunday the 21st of June, which focused on multiple aspects of cybertherapy from introduction classes to specific uses for virtual reality (VR) and other advanced technologies such as treatment of Posttraumatic Stress Disorder, brain computer interface, presence, cognitive and motor rehabilitation and VR for the treatment and prevention of anxiety disorders.

The conference officially began on Monday the 22nd of June, with welcome remarks from the Conference Chairs, Professor Brenda K. Wiederhold and Professor Giuseppe Riva, followed by the fascinating keynote lecture entitled “Advances in Technology for Cybertherapy” by world-renowned speaker Dr. Richard Satava.

Monday’s program included three plenary sessions and an expert panel discussion coordinated by Professor James Spira on the following topics: advances in telehealth experiences, VR and pain, VR and the brain, and future directions in the technological advances in prevention, assessment, and treatment for military deployment mental health.

Tuesday’s events included eight parallel sessions whose topics were: VR for the treatment of anxiety disorders, cognitive and spatial assessment and rehabilitation, interventions for the treatment of addictions, the treatment of posttraumatic stress disorder, virtual online interactions and the psychology and psychopathology of the web. The conference was closed by the general assembly of the International Association of CyberPsychology, Training, & Rehabilitation (iACToR) coordinated by Secretary General Brenda K. Wiederhold and presided over by President Christina Botella.

One of the most attractive and innovative events of the conference was the “Cyberarium and Cyberfashion for Well-being” that took place at lunch time on the 22nd in the main hall of Villa Caramora. As in the previous CyberTherapy conferences, the Cyberarium represented a high-profile event open to the press, which showcased the most advanced interactive exhibits and research and drew a substantial crowd. The “Cyberfashion for Well-being” event included a fashion show of the most innovative wearable technologies that are becoming part of the everyday fabric of society. These wearables are allowing patients access to continuous monitoring as well as allowing individuals who want to prevent disease to monitor their own health status.

The conference ended with a social dinner on the lake and an awards ceremony honoring those who have excelled in the field of cybertherapy.

Three categories of awards were given for outstanding achievements in CyberTherapy:

← One pill makes you larger
Further Alfield: The Changing Landscape of Metabolic Syndrome and Diabetes in Asia →
Scroll Up