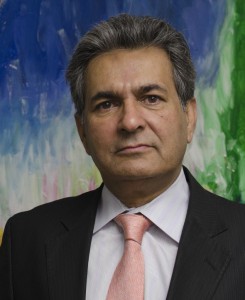 Brenda K. Wiederhold: Tell us about your background and experience

Ashfaq M. Ishaq: I started my career at the World Bank headquarters in Washington DC conducting economic research on entrepreneurship and small industry development in 1980.  The bank’s research department had acquired an IBM System 360 at that time which opened possibilities for econometric analysis of primary data which we had collected.  I coauthor a book which was published by the Oxford University Press in 1987 and by that by that time I had joined the economics faculty at the George Washington University.  Soon thereafter I wanted to leverage my economic development and teaching experiences into advisory services.  So I opened a project development company in Washington which eventually became successful by the mid-1990s.  I had to close this business in 2001 to devote all my time and energy to the International Child Art Foundation (ICAF).BKW: What inspired you to found the International Child Foundation?

AI:  was always interested in creativity and my research on entrepreneurship deepened this passion. It frustrated me that economics dealt with productivity alone and not creativity.  I was asking myself why innately creative children grow up to become bureaucrats.  E. Paul Torrance, who is considered the father of creativity, documented the “fourth-grade slump” in the creativity of children through his longitudinal and cross-sectional studies.  Something happens to us at that age, be it conformity or being educated out of our creativity.  How to help children overcome their creativity slump? The least cost and effective way is through the arts.  But there was no national art organization for American children, nor an international arts organization for the world’s children. The ICAF had to fill this vacuum.

BKW: Tell us more about the background of the International Child Foundation, and the aims of the organization.

The ICAF posed a big challenge as neither I nor my wife had nonprofit experience.  I knew that at least initially we had to invest our own funds, which is what we did.  Right after incorporating the ICAF we launched an international art competition for children age 8 to 12 to address the “4th-grade slump.”  In September 1998 the ICAF hosted the first-ever national children’s art festival, held on the National Mall in Washington DC.

The problem with creativity is that it is morally neutral.  “The greatest work of art imaginable for the whole cosmos” is how a German avant-garde composer Karlheinz Stockhausen described the 9/11 terrorist attacks on the United States.  Creativity alone cannot do the job.  We need empathy as well.  Creativity is the necessary condition for building a brighter world while empathy is the sufficient condition.

BKW: Could you tell us about your current research?

AI: What can we learn from children’s art?   Does child art provide insights that shed light on our creative potential and purpose?  Can the former children learn from the current ones.

BKW: Do you think the public should be more aware of the issues your organization aim to promote?

AI: People do not appreciate children’s imagination and art and hence it has zero market value.  Consequently, the power of the arts to foster creativity and develop empathy is overlooked.  Since creativity and empathy are preconditions for a just, prosperous, and nonviolent world, we should all champion global art programs.

BKW: What are the best achievements you have experienced since founding the organisation?

AI: The ICAF is today a world leader in children’s art.  Next year we launch the 5th Arts Olympiad (2013-2016). We expect that about two million 8 to 12 year olds worldwide will participate in and benefit from their Arts Olympiad experience.  This innovative art and sport program inspires them to embrace the Artist-Athlete Ideal℠ of the creative mind and healthy body—mens sana in corpore sano.  Although the ICAF receives little financial support, its work is essential and its achievements incredible.

On a personal level I was pleased last year to receive The Ziegfeld Award for outstanding international leadership in art education from the United States Society for Education Through the Arts (USSEA) and the Distinguished Service Award from the United States Sports Academy. It is a unique honor for a quondam economist to be acknowledged by art professors as well as athletic instructors and coaches, and that too in the same year.

BKW: Could you explain what the World Children’s Festival is about?

The festival honors the Arts Olympiad winners from U.S. states and participating countries. In 1999 we produced the first World Children’s Festival and ever-since the festival is held quadrennially as Olympics of children’s imagination and co-creation.  Child performers and musicians from around the world apply to showcase their talents.  Architects, engineers, scientists, technologists, writers, Olympians and other professionals come to Washington at their own expense to host workshops and activities for the children.  The children host their own workshops as well. This educational festival has grown into a global showcase for STEAMS Education℠ which integrates Arts and Sport with STEM disciplines (science, technology, engineering and mathematics) for children’s holistic development.  The 5th World Children’s Festival will be held in Washington in 2015. It is free and open to the public, so you are most welcome.

BKW: How has technology impacted your work?

AI: When we started in 1997 all communications were by snail mail, which was very costly and time consuming. Today, about 80 percent of our work is online. The ICAF was one of the first civil sector oraganizations to publish a website in early 1998. We added digital art as a category to the Arts Olympiad in 2004. At the 1st World Children’s Festival in 1999, very few teachers and parents had E-mails. At the 4th World Children’s Festival in 2011, nearly all the children had E-mail addresses. The current issue of ChildArt magazine is on Games & Online Experience. We are also developing a virtual creativity playground (VCP) because if a child’s creativity is not encouraged, it could be lost forever.