Smoking kills 440,000 Americans each year. Despite this grim statistic, 2,000 teens start smoking every day. It is estimated that at least 4.5 million adolescents in the U.S. are still cigarette smokers, despite anti-smoking advertising.

Among the many serious concerns about teen smoking is this statistic cited by the American Lung Association: “of adolescents who have smoked at least 100 cigarettes in their lifetime, most report that they would like to quit, but are not able to do so.” In other words, it takes only five packs before these kids’ smoking “choices” begin turning into an addiction.

In 1998, the tobacco industry agreed to launch its own anti-smoking campaigns, including magazine and television ads. However, these campaigns appear to be doing more harm than good. Philip Morris International, one of the world’s largest tobacco companies, request that vendors place an anti-underage-smoking sign (“Help stop underage smoking – don’t buy cigarettes for kids”) in point of sale locations. What message, though, will teens take away from this sign? They have just been called “kids,” and it has been implied to them that smoking is okay as long as they’re grown-up enough. The message is getting across, but it is not the message supposedly intended. 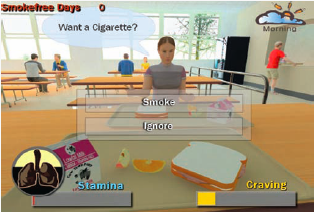 Given the poor record of previous tactics to curb teen smoking and the failure of the tobacco industry to provide effective teen smoking countermeasures, a new approach is clearly needed. It is widely recognized that the initial act of smoking has much to do with a manufactured image of what smoking means and the psychological state of the teenager (see Table 1). In a study launched in 2006, The Virtual Reality Medical Center (VRMC) set out to shatter the media-manufactured image aimed at teens. VRMC theorized that a more effective way to curb teen smoking would be to allow the teen audience to draw its own conclusions about tobacco. To this end, VRMC researchers solicited teens to participate in creating a new message. With funding from the National Institute on Drug Abuse (NIDA) and with the input of teen volunteers, VRMC developed and tested an Internet-based VR environment to curb teen smoking. 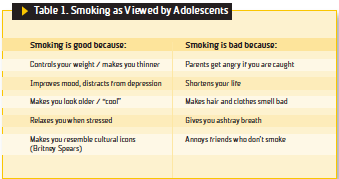 The Internet site is made up of two parts: 1) an introductory page that displays deceptive media messages to make the point without being explicit or condescending and 2) a link to a game that teaches young smokers how to recognize and overcome smoking cues. The inclusion of media messages is an important aspect of this approach. Other groups, such as Campaign for Tobacco Free Kids (www.tobaccofreekids. org/) post tobacco advertisements on their Website with information about how much the industry spends on advertising. They also solicit users of the Website to send ads to them. Acknowledging the ability of young people to think for themselves demonstrates respect for their common sense and makes for a more effective communication strategy.

Figure 2. Software designers at The Virtual Reality Medical Center in San Diego, California get feedback from local high school students on the development of a Website to curb teen smoking. Input from teen participants was an important part of this NIDA-funded study.

The overall goal of VRMC’s Internet antismoking environment is to help teens quit smoking for good. VRMC worked with a group of students from a local California high school to help design an effective anti-smoking message. The high school students helped create images and text for the Website. They also assisted with beta testing and review. When the initial version of the Website was tested on another group of teens, results showed that the Website dramatically increased their knowledge of the effects of smoking and techniques for smoking cessation.

Virtual reality (VR) has been used successfully by VRMC in a variety of therapeutic and training applications. Because VR is a heightened experience of computer gaming, it is particularly well-suited to deliver education to the teenage demographic. Speaking to teens through VR gets their attention due to the novel and interactive qualities of the medium. VR also uses mechanisms with which teens have familiarity, skill, and interest through their experiences in computer gaming. With its online capability, the program is easily accessed almost anywhere in the world with minimum system requirements. In its latest development, the application has been imported onto a cell phone platform, which is very desirable among mobile-savvy and participative teenagers. 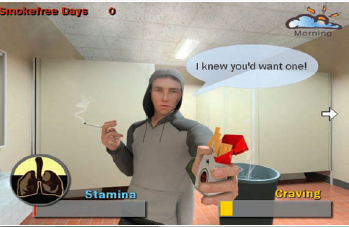 Figure 3.
The environment is
based on the daily routine of a typical teenager                   and contains common smoking cues

VRMC has conducted several previous investigations in collaboration with Korea’s Hanyang and Chung-Ang Universities using VR to study smoking cues. In a study for nicotine craving, virtual environments (VE) were set up for smokers to virtually navigate. The rooms contained different smoking cues, such as an ashtray and an open pack of cigarettes on a bar. Overall, the study was determined to have helped reduce cravings in those who are nicotine dependent. Dr. Brenda Wiederhold was also involved in a study using functional magnetic resonance imaging (fMRI) to study smoking cravings in VEs. This study tested whether smokers could experience cue-induced smoking craving inside an MRI scanner by using the VR system, and, if so, whether the magnitude of the craving differed between the classical device (2D pictures) and the VE scenario. The study concluded that smoking cues in the 3D virtual world were stronger than in the 2D world. 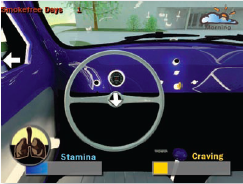 Researchers at VRMC hope that by using the distinctive attributes of VR, they can create effective counter messages to the tobacco industry’s media campaign, which has been ongoing for more than 50 years. VRMC’s expertise in combining VR with therapeutic applications provides a unique understanding of how VR can be an effective response to the tobacco industry’s construction of the meaning of smoking. Several Ministries of Health in Europe have expressed interest in VRMC’s Internet-based program originally developed in the U.S. to curb teen smoking. Sensitivity and attention to cross-cultural cues will be important in successful acceptance and implementation of the anti-smoking message.