Traditional Chinese medicine has been used for thousands of years to treat mental disorders and only fairly recently, in the 1990’s and new century, has the force of modern psychiatry as the Western world knows it gathered momentum. Particularly in rural areas and throughout China today, traditional Chinese medicine is the preferred treatment method over Western practices and many psychiatric hospitals have specialists in traditional methods, often resulting in a mixture of traditional and modern treatments chosen by patients.

The cultural stigmatization of psychological interventions to treat mental disorders has greatly hindered large-scale advances. To this day, the vast majority of mentally ill patients refuse psychiatric treatment of any kind. This is common to many Asian societies and awareness is slowly increasing as a result of the actions performed by leading organizations and researchers, and healthcare advocates.

Western neuropsychiatry was introduced in China at the end of the 19th century and developed slowly at first. The first Chinese mental illness classification system was not established until 1979 and in 2007 only 17,000 psychologists per capita were licensed to practice– ten percent of the number per capita in most developed countries. Increasing prevalence of mental illness in China has been a worry for decades. In 1950, 2.7% of the population was afflicted with severe mental illness. The number rose to 5.4% in 1970, 11.1% in 1980, and 13.47% in 1990. This is due to rapid socio-cultural changes such as changes in traditional family structures and values, the demands of higher standards of living and the transition from a planned to free market economy. It is important to keep in mind that these statistics are arguably affected by increased acknowledgment of mental health disorders.

China, containing one-fifth of the world’s population, has taken measures to tackle the problem of treating disorders affecting such a large and widespread group of people by establishing organizations such as the Society of Psychiatry and the China Association for Mental Health (CAMH) which aims to promote the development of mental health sciences and improve the overall mental health treatment system of the Chinese people. 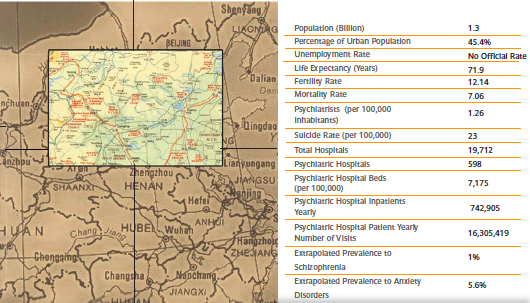 As was discussed previously in Dr. Weidong’s article (see page 34), the past thirty years has seen a huge increase in the applications and development of computer graphics and virtual reality (VR) throughout China. With increased processor speed and storage capacity seeing new developments in the past 10 years, in particular, VR has been increasingly used by diverse companies and universities in fields such as education, manufacturing, entertainment and much more. The Qiushi Academy for Advanced Studies (QAAS) at Zhejiang University, Qingdao University University of Electronic Science and Technology of China, Huazhong University of Science and Technology, Fudan University, East China Normal University and Tsinghua University are at the forefront of universities and research institutes who have recognized the importance of this growing technology and are using it to explore mixed reality-based rehabilitation and other related applications. Specified lab work is also being done to enchance VR applications, such as computer vision research.

A large amount of exploratory work on computer vision research has recently been conducted in a VR lab at Qingdao University. The head of the group, Professor Weizhong Zhang, directs the project team’s research which specifically focuses on computer vision, image processing and pattern recognition, particularly LCD-based camera calibration, reconstruction of 3-D structures based on multiple images and key technologies of photogrammetry based on the use of digital cameras.

Specific work done by the project team includes creating a camera calibration method based on LCD in which a calibration table with circular feature points of different sizes is displayed on an LCD screen. Several images of the calibration table are shot by rotating the camera around the optical axis, using camera parameters based on a calibration algorithm calculated by Dr. Zhang. A new approach to estimate poses of the camera based on multi-view geometry and an algorithm of reconstruction of space points is also being explored. Lastly, a novel method has been implemented to calculate the measurement of 3-D curve structures by using a hand-held digital camera.

Professor Zhang’s unique contributions and the work of other experts will help to advance the growing field by improving the quality of VR and encouraging its applications to become more diverse and widely-used throughout China.

A reliance on traditional Chinese medicine, as well as a reluctance to acknowledge or seek treatment for mental disorders, continues to shape the way mental health treatment is carried out. As well as society’s increased acceptance of mental disorders, obstacles to be overcome in the future include a shortage of funds and professionals, factors dependent on the large population and size of the country.

With the established reputation and acceptance of VR treatment in other parts of the world, China benefits greatly by collaborating with foreign research institutes. The National Science Foundation of China works to provide funding for not only domestic projects, but also international and exchange projects. China has recently experienced drastic improvements in its relationships with North America, Japan, Australia and Europe and is beginning to link with top laboratories to work on projects together. By looking to model its growth in advanced technologies for healthcare after other countries throughout the world, and with large steps in the right direction, China is making vast improvements in the field and will continue to do so with further growth and attention.

← Letter from the Publisher
Transforming VR into a Reality for Behavioral Healthcare: The NeuroVR Project →
Scroll Up