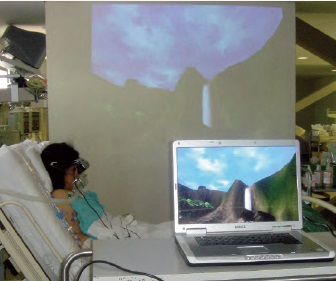 There are many reasons and justifications to use VR in hospitals. In Neonatology (0- 28 days old) there are newborns who can stay in care units for days, weeks and even months, growing without contact from the outside world apart from a few hours a day where parents can visit their children. The psychological impact in growth and development during childhood is incredibly strong; this is where neurostimulation in a closed environment is a useful alternative. In infants, virtual reality has been a good resource to reduce pain and anxiety in oncology. Hunter Hoffman has also demonstrated the benefits of using virtual reality during medical rehabilitation for child burn victims. It can also be applied for postoperative cardiac surgery patients whose rehabilitation consists of mainly staying in bed under sedatives and other treatments. The application of VR not only helps psychologically, due to their severely limited movement, but also helps improve breathing. In ambulatory surgery too, virtual reality cannot only help reduce pain and anxiety for the patients during the operation, but also during their recovery. There are, of course, many more areas of medicine where virtual reality can be applied; gynecology and obstetrics, gastrointestinal endoscopy, pediatrics and epidural and spinal block anesthesia.

While all patients were affiliated with Instituto Mexicano del Seguro Social (IMSS) and Instituto de Seguridad y Servicios Sociales para los Trabajadores del Estado (ISSSTE), the subjects were of different gender and age, and were mostly undergoing different types of medical procedures. Despite this, the techniques used in order to measure the success of the application of virtual reality to patients remained the same. The necessary virtual reality equipment would be mounted which was followed by a nurse measuring blood pressure, heart rate and breath rate before, during and after the procedure. Next, the physicians would ask their patients on a scale of 0-10 whether or not they were feeling anxiety or pain which would occur multiple times during a procedure. 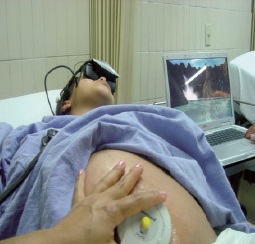 The strongest results were seen in the three main representative groups where pain and anxiety were highest; colposcopy, ambulatory surgery and postoperative care unit of cardiac surgery. While the comparative measure of pain was made before, during and after each procedure, the statistical method to measure pain was used with a scale of 0-10 (zero is no pain and 10 is a high level of pain). In the colposcopy group that used VR, the mean pain before the procedure was 7.5 and 5.35 during. Afterwards, the difference was of 2.15, corresponding to a 28,66% in the reduction of pain. In the colposcopy group that didn’t use VR, the mean pain before was 6.43 before and 6.78 during which is a difference of 0.35, an increase of pain of 5.44% In postoperative cardiac surgery patients, a reduction of pain and anxiety by 54.5% was seen, despite the mean pain at the beginning of the procedure being 8. Despite the lower mean, 5.57, of pain for the surgical group who did not use virtual reality, a reduction of pain and anxiety at the end of the procedure was only 36.80%. With these results we can appreciate the impact the distraction of virtual reality provides the patient in order to reduce anxiety and subsequently, visceral and somatic pains that regional anesthesia can induce.

While results varied depending on age, gender, procedures, culture, diagnosis and prognosis, all in all the data showed that the reduction of pain and anxiety, the latter in particular, was prominent (the variance within these groups is due to the two different pathways with which pain is transferred; somatic and visceral, as well as the patient’s psyche). Patients between the ages of 5-14 were found to enjoy virtual scenarios more than any other; older patients mainly demonstrating curiosity for the new technology at hand. The main benefit of applying virtual reality is that, due to the reduction of pain and anxiety and its noninvasive method, it allows for reduction of medication, bed days and, especially, an increase in the wellbeing of patients.