Recent studies show that pain affects 13% to 53% of the population throughout the world, making pain management one of the highest priorities in medicine today. Approximately 10,000 physicians specialize in pain management, yet only 5% of patients with the most severe pain ever get to see a specialist. Although chronic pain is the most common reason for seeking medical care, more than 20% of people with chronic pain do not seek a doctor’s care. Chronic pain rises with age and affects a higher proportion of women than men. Although three to six months is the definition for chronic pain, long-term surveys show that 20% to 46% of chronic pain patients have had it for 10 years or more. Pain is of moderate to severe intensity for most patients, and other than the opioid analgesics, few prescription pain drugs achieve acceptable pain relief in more than 50% of treated patients. Evidence shows that there is a clear need for adjunctive pain relief. 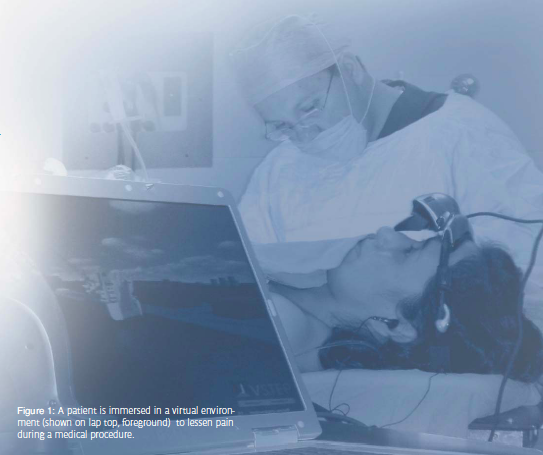 Two-thirds of chronic pain patients say that pain interferes with daily activities, especially participating in physical activity— and the less physical activity there is the more acutely pain affects and complicates quality of life. Chronic pain is associated with poor general health and interferes with mental health as well. As a result, more than one-third of pain sufferers feel isolated by their pain, and almost one-third say they feel their families do not understand their pain.

Virtual reality (VR) utilizes innovative technology and software to display virtual environments to users with the aid of a headmounted display. Head tracking allows the user to interact with and actively view the environment in 360 degrees. Therefore, the images that the user sees reacts to the position they move their head. Another way VR is reactive is through the manipulation of the environment, usually through a mouse or keyboard. These advanced systems allow users to interact on many levels with the virtual environment, exploiting many of their senses, and encouraging them to become immersed in the world they are experiencing.

Immersion is one of the concepts that allow VR environments to distract patients undergoing various medical procedures in ways that go above and beyond other techniques. Immersion relates to how present the user feels in the world and how real the environment seems. When immersion is high, much of the user’s attention is focused on the virtual environment, leaving little left to focus on other things such as pain. 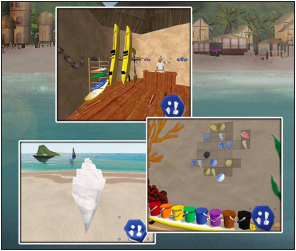 Clinical applications of VR and other technologies, and experimental research on why it has such a powerful impact on behavioral healthcare, medicine, and neuroscience, have demonstrated an array of success in significantly altering the way we view current methods of treatment for pain and anxiety and opens up exciting new possibilities and areas of improvement and innovation in non-pharmacological adjunctive pain relief. VR has been found to be effective in reducing reported pain and distress in patients undergoing burn wound care, chemotherapy, dental procedures, venipuncture, and many other painful procedures by drawing attention away from the patients’ mental processing, thereby decreasing the amount of pain consciously experienced by the patient. Additionally, VR for neurorehabilitation and physical rehabilitation has demonstrated success, as has VR for other such diverse areas such as prosthetics and orthotics training. Promising outcomes have been achieved by research conducted since the 1980’s.

Firstly, studies have shown that distraction can take place by performing as simple an action as looking at pictures. A study was conducted in which elderly persons were shown affective images and pictures while performing their physiotherapy exercise and results implied that affective images and pictures appear to be a useful non-pharmacological intervention for pain management of elderly persons. 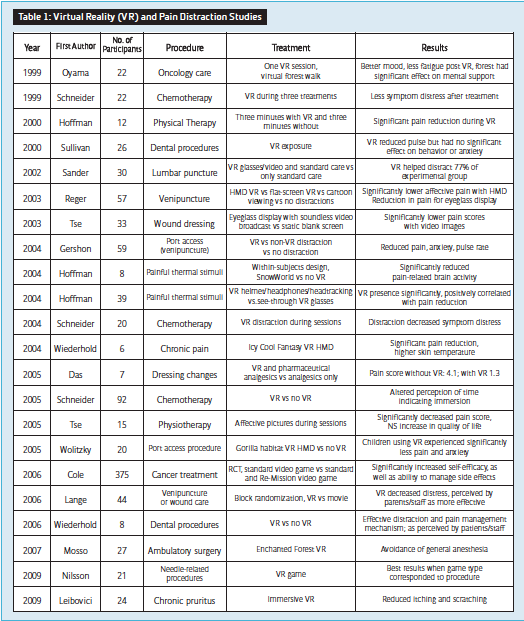 This data diverges with earlier reports of the utilization of relaxation which produces a decrease in physiologic arousal during such dental procedures.

More than a decade later, similar studies involving VR distraction were conducted using cancer patients. This work, which consisted of immersing users in the virtual forest walk system, a virtual environment, to investigate the efficacy of VR technology in the psycho-oncological care of patients’ mental health, demonstrated that that the exposure had a considerable positive effect in the mental support of cancer patients. In another study, VR distraction intervention for women suffering from cancer was used to control chemotherapy-related symptom distress, boosting patients’ ability to remain on schedule for treatment regimens and cope with the disease, and improve patients’ quality of life and increasing the chances for survival by decreasing treatment-related symptom distress.

Several studies have identified distraction as a coping mechanism effective for children with cancer. In one study, VR as a distraction intervention for minimizing chemotherapy-related symptom distress in children with cancer was explored where patients wore a Virtual IO headset during an intravenous chemotherapy treatment while playing one of the following three CD Rom-based scenarios–Magic Carpet, Sherlock Holmes Mystery, and Seventh Guest. According to the data analysis of the SDS, VR intervention was effective at decreasing the level of symptom distress immediately after the chemotherapy treatment, however, it did not have a lasting effect. It is interesting to note, though, that the high levels of anxiety during the initial chemotherapy treatment showed a decrease during successive treatments.

Further studies support the idea that in comparison with the no distraction condition, diminutions in pain and anxiety, including lowered pulse rates, were witnessed for children with cancer who used the VR distraction during treatment. Further examinations into the analgesic potential of VR as a distraction intervention for patients with cancer was further examined in a study which showed VR glasses are a practical, age-appropriate, nonpharmacological addition to standard care in handling the pain associated with lumbar punctures in adolescents. In another study, the efficacy of VR as a behavioral intervention designed to reduce distress during a port access for 7-14 year old oncology patients. Distress experienced by the children was evaluated through both subjective self-ratings as well as objective physiological and behavioral ratings. On all measures, VR was effective in decreasing children’s distress. 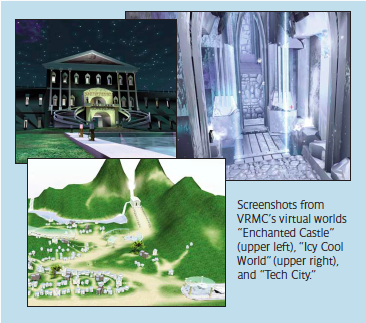 As well as providing distraction from pain during chemotherapy treatment using VR, patients conveyed that they experienced an altered perception of time. These findings support the idea that VR can help make chemotherapy treatments more tolerable; however, using VR doesn’t improve chemotherapy-related symptoms. VR can also be used to educate patients and has been shown to lead to significant increases in cancer-related selfefficacy and knowledge through the use of an appealing interactive videogame platform. HopeLab has created a PC-based game, titled Re-Mission, which consisted of 20 missions within fictional cancer patients’ lives, undergoing radiation, chemotherapy, and immunotherapy.

Several studies focusing on burn pain, such as work done by Hunter Hoffman (see article on page 14), have led mental healthcare to new frontiers as well. Studies found that immersive VR decreased the amount of pain reported in addition to the amount of time burn patients spent thinking about the pain during physical therapy. The data provides preliminary support that VR can act as a strong nonpharmacologic pain reduction method for adult burn patients. Another study investigated children with acute burn injuries and found strong support for the use of VR-based games in providing analgesia for children’s acute pain with minimal side effects, reusability and versatility, as well as little impact on the physical hospital environment.

The effectiveness of VR as a pain distracter has also been examined for patients undergoing venipunctures and wound dressings. One investigation looked at whether VR was more effective at decreasing pain and distress in children undergoing minor procedures versus watching animated movies. These findings indicate that VR is at least as effective as and significantly more pleasant than watching an animated movie. Other research findings suggested that visual stimuli generated by an eyeglass display were a helpful nonpharmacological adjunct for pain relief in elderly patients receiving wound dressings for leg ulcers. Similar findings further supported VR as a pain distracter for children undergoing venipunctures.

In order to understand how VR can effectively reduce pain, work has been done to investigate the neural correlates of VR analgesia. In a particular study, participants’ pain-related brain activity was measured using fMRI during conditions of VR and no VR. VR considerably decreased pain-related brain activity in all five regions of interest including the anterior cingulate cortex, primary and secondary somatosensory cortex, insula, and thalamus, as anticipated. Direct modulation of brain pain responses by VR distraction was demonstrated by the data.

These studies support the use of VR to distract patients from pain and anxiety during painful or unpleasant medical procedures. Continuing education and research ensures that the field continues to grow and further direction will be used to begin to dissect and analyze the specific brain mechanisms underlying pain distraction with VR.

Treatment Outside the Clinic

Although it is widely recognized that VR treatment is applicable to treating anxiety and pain in a clinical setting, a certain number of factors has hindered its use outside the office, such as the large amount of space needed for equipment and high cost of utilizing such systems.

A low-cost alternative to the traditional delivery method for VR is the cell phone. Virtual Reality Medical Center (VRMC) has produced a number of PC-based portable medical devices, including programs to treat pain and pain-related anxiety. To test the efficacy of a prototype virtual environment for the cell phone, VRMC compared a pain focus condition to a virtual environment condition in participants with chronic lower back pain. Data on heart rate and skin temperature were collected, as well as painintensity ratings obtained from self-report questionnaires. As with VRMC’s PC-based product, all participants reported a drop in pain while in the cell phone virtual environment. As in the PC product study, the significant decrease in heart rate and the significant increase in skin temperature while the participant was in the virtual environment substantiates the three self-reported pain ratings, indicates a reduced level of pain and anxiety, and suggests that VR via small-screen display is an effective method of reducing this distress. These findings will support the use of VR distraction outside the doctor’s office and encourage patients to address anxiety and pain through non-pharmacological methods.

The VRMC specializes in the creation of augmented reality environments that are used to increase levels of immersion and presence, both effective for increasing distraction which can lead to diminished pain, for participants undergoing therapy. Funded by the National Institutes of Health and the National Institute on Drug Abuse, the VRMC developed a VR pain distraction system to be used in the dental office. Patients had a variety of dental procedures including replacement of crowns, fillings, root canals, and cosmetic dental work and during the dental procedures the patients wore a VR head mount and observed a variety of software environments. While the patients were in the virtual environments, non-invasive sensors were used to measure physiological signals including electrocardiogram, skin temperature, skin conductance, and respiratory rate. Overall, dental patients reported a reduction in the level of discomfort and pain while exploring the interactive virtual worlds. 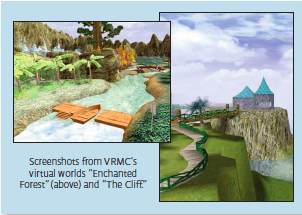 After looking at an overview of research involving the use of VR and other types of interactive simulation tools that demonstrate a capability for reduction in painful or other unpleasant symptoms during medical procedures, it is evident that there seems to be a correlation between level of interactivity and immersion in the virtual environments and success in relieving distressing symptomatology. In particular, preliminary evidence suggests changes in brain fMRI patterns that seem to correlate with effectiveness of pain relief during VR interactions. Clearly, management and successful intervention for serious pain requires a multidisciplinary team of clinical experts. Successful distraction by using these interactive tools may provide an additional augmentative option that is acceptable and often preferred by many patients. Further elucidation of the mechanisms underlying pain relief should be explored so that improvements and the specific creation of environments linked to specific types of pain and specific disease conditions can be developed.