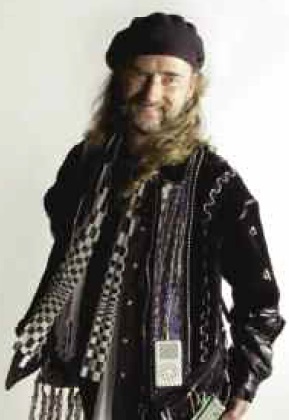 When most think of fashion, we tend to think of chic models, latest trends, beautiful garments, and innovative designs. The clothing industry has generated billions in revenue by creating enticing designs for the general population. Fashion designers are always searching for the next fashion trend for innovative products. I would like to declare that I have discovered that new trend; that new, exciting, and innovative fad that will change the fashion world forever: the new trend is here, it is “now,” it is… technology.

Recently, technology has begun to emerge onto the fashion scene, creating unique additions incorporated within fashion designs. Products such as mobile phone technology, kinetic energy, and sunlight reactors have begun to intertwine with well-known fashion designers, introducing technology to runways worldwide. However, interestingly enough, technology companies have begun to “dip their toes” in the pool of fashion as well. Companies such as Philips, known throughout the world for their technologies and electronics, have begun producing technology that can be fused with textiles to give your clothing that “extra something,” the new wave of the future.

Medical technology has begun to realize the incredible market for wearable technology. Wearable health companies have surfaced in North America, Europe, and Asia as innovators to the new “trends” in healthcare. Intelligent textile companies use their textiles for the wearer’s wellbeing, using temperature-changing materials to change color in reaction to body heat, fabrics that have their own cooling system in reaction to the wearer’s environment, and even clothing that has its own personal heating system.

With materials and technology like these, the future is electrifying. Imagine being able to control your own body heat at all times, never too cold and never too hot. Envision the possibilities if a material can determine if an infant has a fever or is too cold when it cannot speak to its parents. 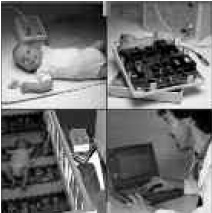 Mobile phones and telehealth have made headway in the medical field, bringing wireless communication for better health and wellbeing to the user. Companies have even created clothing that actually acts as a mobile phone, catching much media attention worldwide. CNN.com has recently described this phenomenon, stating, “Futuristic fusion of fashion and technology is becoming more common as [clothing] designers are increasingly incorporating electronics into their garments.” The article featured fashion companies that have added creative technology in their garments. Products featured include swimwear that changes colors in reaction to sunlight, a dress that measures air quality, garments that show moving video images and a self-heating vest, among others. CyberFashion has progressed into the entertainment industry, with products such as the “air guitar t-shirt,” a shirt that allows the user to play an objectless musical instrument by Dr. Richard Helmer of the Commonwealth Scientific and Industrial Research Organisation (CSIRO), and Cute- Circuit’s “Hug Shirt,” which enables mobile phones to give someone a “virtual hug.”

But why are these companies moving towards technology instead of using, should we call them, “unintelligent” textiles? Is this a passing fad or has this sparked the new wave of modern clothing? There is no doubt that wearable technology is on the rise. The future cannot be foreseen, but the possibilities are so bright; this will most undoubtedly change the way we wear our clothes. Once these products become affordable and commercialized, the trend will take off and continue to prosper. Even the “simplest” things, the ability to change the color of a garment at will or trendy mobile phone accessories, are sure to become more than a passing craze. Investigating these new garments is difficult, as most are not currently commercializing their products for the mainstream market. Philips, who has created the LumaLive technology, a material that can change colors, shapes, and designs controlled by the user, rents out their technology for shows, but are still in the “customizing phase,” working to make their product more flexible. Other designers such as Hussein Chalayan and Vega Zaishi Wang use technology to create visual effects on a runway, but do not necessarily infuse the effects in the com mer – cialized version.

Bruce Damer of CyberWearz has created the iDoublet, in which he designs clothing that incorporates an Apple iPod directly into the garment. The iDoublet was debuted at MacWorld. In addition, Damer has presented his research at many prestigious conferences and shows including the Second Skin Show in San Francisco, the 11th Annual Presence Conference in Padova, and at the Virtual Worlds Summit in London. “I see a merger between the two fields with textiles becoming high tech and manufacturing of garments becoming driven by CAD/CAM (Computer Aided Design/Manufacturing),” Damer states, “The apparel business is one of the last holdouts of old fashioned 18th Century hand construction.” A pioneer in early virtual worlds and avatars now turned designer, Bruce foresees fashion moving towards the medical realm. “Medical health monitoring [and] cyber-garments will bring real breakthroughs such as heart monitoring, galvanic skin response, and communication of health status.”

Other pioneering developments in clothing have made headway in this field. The Mamagoose pajamas, created by the European Space Agency, embody built-in sensors and electronic monitoring to detect Sudden Infant Death Syndrome (SIDS), more commonly called “cot death.” When symptoms or characteristics of SIDS arise, an alarm sounds to prevent death. The World Health Organization (WHO) has conducted many studies on using wearable monitoring systems for the prevention of the relapse of depression, monitoring and correlating responses to antidepressant drugs, detecting drug misuse, and to warn or obtain feedback in order to prevent self-injury and suicide. The most incredible benefit for using intelligent textiles is the ability for the user to live a “normal life,” while wearing a medical disorder preventative aid. Such anticipatory garments can be worn underneath other clothing which still appear to be “unintelligent” textiles, giving the user the feeling of normalcy. Even “wearable computing,” a wearable computer that monitors behavior and health, can appear to be a common wristwatch.

On the other hand, as critics may suggest, there are a few downsides to technology in clothing:

Practicality. Clothes become dirty and therefore must be washed. Modern technology must be made waterproof to be completely integrated into clothing.

Affordability. Incorporating expensive technology into new designs will be pricey. Most consumers are not willing to part with hundreds to thousands of dollars for an article of clothing.

Paranoia. For those conspiracy theorists, one could make the argument that incorporating technology into clothing is one more way for an individual to be monitored, given the possibility that electronics capable of tracking devices could be attached to the garment. However, mobile phones already have such tracking capabilities; a concerned parent would not have to worry about their child losing a phone if the monitoring chip was built into the child’s clothing.

Longevity. Clothing featuring battery-powered electronics must either be charged or will most likely have a short life span. If such an expensive garment were purchased, the consumer would not look too kindly on its inability to last.

Reliability. Micro-technology and electronics have the tendency to break or go “haywire.” Mobile phone companies, small electronic producers, and handheld music device companies have support staff, reliable store outlets for repair, and can easily exchange the item for one similar. With these added hassles, mainstream clothing companies may avoid selling such materials, despite their ability to appeal to the consumer. 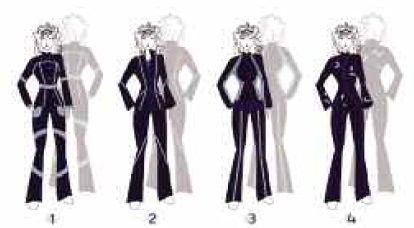 Designs made of a jogging suit that lights up from kinetic energy during evening runs for safety and visibility by fashion students at the University College Ghent for the CyberFashion for Wellbeing Show. Designs created by 1. Julie Migneau, 2. Lieve Martens, 3. Saskia Dobbelaere, 4. Bertien Boon. Jean Luc Dejaeghere is also involved in the design team.

Despite the above complications, cyberfashion has many positive attributes while the complications previously mentioned have the ability to be fixed. Looking at medical purposes alone, the positives outweigh the negatives. Many companies have solved the waterproofing issue; affordability will come with time, while longevity and reliability can be perfected in the coming future.

CyberFashion has initially emerged at technology conventions and conferences. The upcoming CyberTherapy & CyberPsychology (CT14) conference will celebrate cyberfashion this June near Milan, Italy. The annual Cyberarium, which provides a forum for new and emerging technology, research, and wearable products, will incorporate advanced technology with high fashion at the first CyberFashion for Wellbeing Show.

Fashion students have already begun to construct designs focusing on medical wellbeing for the show. Conference organizers are engaging with fashion designers and wearable companies to participate in this innovative fashion show. Taking place in Lago Maggiore, Italy, the venue is beautifully set on the gorgeous Italian lake, near Milan, the fashion capital of the world.

New and emerging technologies will intertwine with the clothing, textile, and fashion industry. Women’s apparel seems to be the “up and coming” sector of fashion to first feature technology. Look for the latest trends to materialize in accessories such as purses, bags, and shoes before evolving to garments. There is no doubt in my mind that cyberfashion will become the new craze and even revolutionize the clothing industry. It just goes to show that within the exciting and innovative field of technology, there is always something fresh and captivating, delighting the user in a multitude of capacities.