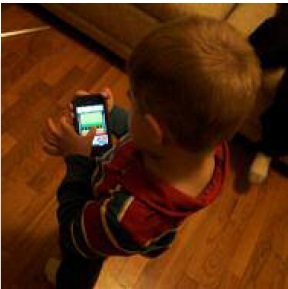 You see them here. You see them there. It seems you see them everywhere. Sometimes they’re held against the ear, sometimes they‘re attached to it. Sometimes they’re held at arm;s length, which seems to trigger rapid activity in both thumbs against a tiny keyboard. Other times holding them at arm’s length seems to focus the user’s attention on the tiny little screen they possess, often evoking emotional reactions to what is happening on that screen. Some can take pictures and save them for you. Some can help you find your way around town. Most make noises¬–funny noises, pleasant noises and downright irritating noises. These noises often cause others to look around with annoyance for the source of the noise, making clear by facial expression alone that the noise is unwelcome and should be stopped, immediately. Welcome to 2010. Welcome to the decade of the cell phone, text messenger, iPod, blackberry or any one of a number of devices we will collectively call in this article the “handheld.” What do we know about handhelds? Judging from a Google search entering the word “handhelds” on December 20, 2009, we apparently know quite a lot–12,800,000 Web sites deal in one way or another with handhelds. A mere 9,500,000 deal with cell phones. On the other hand, if we search psychological literature for professional research articles such as PsychINFO with the word “handheld,” that number plummets to 14. Change the target word to “cell phones” and we’re a bit better off. Sixty-one research articles address cell phone effects. Thus, we are sorely in need of research on the psychological effects of using handhelds, which include their social, cognitive, moral and behavioral effects. Our knowledge of the psychological effects on children, the sure-tobe handheld generation, is abysmally limited.

A brief look at the statistics on handhelds prompts urgent questions about their psychological effects. In June 2009, wireless penetration reached 89% of all U.S. households, compared to 34% in June 2000. According to the Wireless Association, a professional organization that has tracked wireless activities for the past 25 years, the annualized total wireless revenues in 2009 was $151.2 billion compared to $45.3 billion in 2000. Monthly SMS (short message system) activity, commonly known as text messaging, increased from 12.2 million in 2000 to 135.2 billion in 2009. Corresponding to this change, the annualized minutes of cell phone use increased from 194.95 billion in 2000 to 2.23 trillion in 2009.

The shift to wireless technology is not a U.S. phenomenon. It is a global trend evident in all of the developed world and in much of the developing world. More and more applications that once required a clunky computer or portable but heavy laptop are migrating to the handheld world. Already the handheld has encompassed the most popular information technology (IT) applications for adults–the Internet and e-mail. Handhelds began as cell phones, which remains their primary use, but text messaging (SMS) is increasing by leaps and bounds, especially among the under-30 crowd. Most cell phones now also have cameras and many have a global positioning system (GPS) that is as sophisticated as a standalone GPS. And much to the delight of the under, under-30 crowd, the tweens or teens and young adults, videogames are quickly becoming part of the handheld world. For the right price you can indeed have the world at your fingertips.

The two most studied IT applications of greatest interest to children that have migrated to the handheld world are videogames and cell phones, including the text messaging and picture-taking features of cell phones. Interdisciplinary teams of researchers have been addressing the question of what effects, if any, videogame playing and cell phone use have on children. Thus far, more progress has been made on videogame effects than on cell phone effects. Videogame playing in adults has been causally related to visual-spatial skills and correlated with these skills in children. Visual- spatial skills are viewed by many developmental psychologists as the “training wheels” for later performance in science, technology, engineering and mathematics, however, stronger evidence exists for a negative relationship between videogame playing and psychological outcomes. Children who play videogame more have more aggressive cognition, aggressive behavior, poorer academic performance, more negative teacher ratings of classroom behavior and greater body weight than a comparable sample of non-players. To date, no distinctions have been made in the literature as to whether the mode of videogame delivery is over the Internet, through a console or by way of a cell phone, although the commercialization of videogames suggests that the console is currently the most popular mode of videogame delivery.

Conspicuously absent in the developmental and IT literature is research on cell phone correlates and effects on children. As of 2007, the global cell phone market contained approximately 1.8 billion subscribers. It is forecasted to reach three billion by the end of 2010, at which time nearly half of all human beings on earth will have and use a cell phone. Although voice calls currently account for about 80% of cell phone revenue, the short message service (SMS), or text messaging, is becoming extremely popular, particularly among the under-30 crowd. In fact SMS is expected to dominate mobile messaging in both traffic volume and revenue by the end of this decade. SMS is a favored mode of communication among youth who have access to cell phones.

The lack of research on cell phone use effects on children may be partly attributable to its lower adoption by this age group than other forms of IT such as videogames, but the age at which children receive their own cell phones keeps dropping and the time to ascertain effects, good or bad, is now. On the positive side, cell phones used as communication devices have the potential to increase social connectedness and even improve parentchild relationships with the responsible use of the cell phone by both. On the negative side, there is the potential for cell phone use to increase social isolation as more and more time is devoted to text messaging and less and less time to faceto- face interaction, with family, friends and acquaintances. The effects of videogame availability on cell phones raises yet another set of important research questions in child development. The benefits and liabilities of the handheld vidoegame may depend on child characteristics and perhaps even parent characteristics, which will need to be clarified in future research. At this time the best that can be said for cell phone use is that it facilitates social connections, including connections with parents, which may outweigh any negative effects in face-to-face social communication. Indeed, some research shows that youth use cell phones primarily to connect with existing real-world social networks to strengthen connections among members.

Handhelds are not the way of the future–they are here now and here to stay until the next wave of technology innovations renders functions too slow, too demanding or simply inadequate. What we need to do now for children of the handheld generation is to determine how to maximize the good and minimize the bad potential effects that come with every technology innovation. The ease and enjoyment with which children use handheld devices begs for research on the development of games that foster learning, especially learning in science, technology, engineering and mathematics (STEM areas). A newborn, an infant, a toddler and a preschooler learn by playing. Why should it be otherwise in the K-12 child. We and our colleagues, Jing Lee, at Syracuse University, and Yong Zhao, also at Michigan University, intend to experiment with learning STEM areas wrapped in nanotechnology concepts using handheld devices programmed to resemble computer games. Our hope is that learning will be as natural an outcome of playing as it is in the early years, when we learn an entire language, categorization and socialization, among other complex concepts. We would like to encourage others to join in the search.