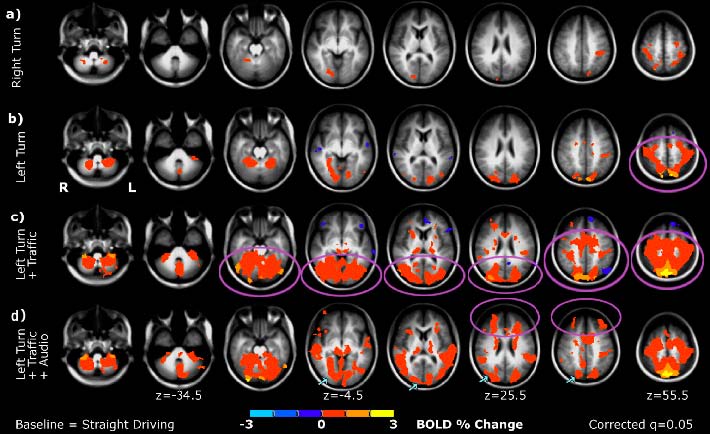 By Tom A. Schweizer et al.

Driving is an essential daily behavior for many people. For some, it provides freedom and easy travel. For others, driving is their livelihood. We often take the ability to drive for granted, but it is a very complex behavioral task that requires coordinated perceptual, cognitive, and motor functions. Impaired vision and motor function can negatively impact safe driving, and various assistive devices such as corrective lenses and altered driving controls are very successful solutions. However, the essential role of intact cognition – including, for example, the ability to sustain attention during a task, divide attention between multiple tasks when necessary while avoiding distractions, and to make sound driving judgements related to on-road conditions- needs to be better understood to make our roads safer.

The visual, motor and parietal cortices, as well as the cerebellum, are critical brain regions involved in driving competence and are responsible for visual-motor and visual-spatial processing and integration. Normal healthy aging and different types of neurological conditions can cause impairments of attention, memory and executive “frontal lobe” functions that are critical to driving ability. In today’s world, with the increased prevalence of smart phones and cars outfitted with high-tech communication devices, it is becoming increasingly important to understand how the brain deals with distractions during driving.

To study the complex patterns of brain activity that support driving behavior, our team has recently developed an immersive driving simulator system with a fully operational steering wheel, brake pedal and accelerator that has been specially developed for use during functional magnetic resonance imaging (fMRI). This advanced set-up provides a realistic, highly controlled, safe, confidential testing environment for studying simple as well as increasingly challenging driving scenarios, across the spectrum of healthy drivers and those with neurological or psychiatric disorders, in a manner that cannot be achieved safely during on-road testing. 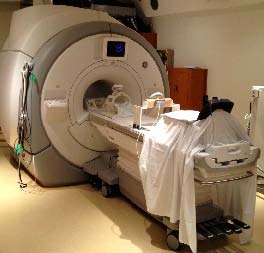 In a recent study, we found that different aspects of driving performance relied on different brain regions. For example, when performing more straightforward driving manoeuvres such as driving straight or making right-hand turns, experienced young, healthy adult drivers were found to activate a network of brain regions related to visual-motor and visual-spatial coordination (see Figure 1). When these individuals performed more complicated manoeuvres, such as making a left turn at a busy intersection with oncoming traffic (where importantly, most fatal accidents occur), they activated more brain regions, and to a much larger spatial extent. Furthermore, when the same left-hand turns were made during a distracting auditory task, similar to talking on a hands-free cell-phone, a striking, potentially dangerous brain activation pattern emerged. During distracted driving, brain activity shifted from regions critical for visual processing, to frontal regions that play a role in divided attention and multitasking. This observation suggests that distracted driving has the potential to limit the neural resources that are available for driving safely.

What will be the long-term significance of this finding? Time will tell; we are in the process of conducting ongoing driving simulator and fMRI experiments in healthy young adults, elderly adults and patients suffering from stroke and Alzheimer’s disease to investigate the impact of distractions on driving safety. Possible outcomes include assisting physicians to develop improved clinical tools for determining when patients are safe to drive, and assisting policy-makers to develop new regulations to make our highways safer.