By David I. Lee

Prostate cancer is the most commonly diagnosed cancer in men in the U.S. It is estimated that nearly 200,000 men were diagnosed and nearly 28,000 men died because of prostate cancer in the U.S. in 2009. While a myriad of treatments exist including external radiation, brachytherapy, proton radiation therapy, high intensity focused ultrasound, cryosurgery and active surveillance, many men opt for surgical removal. Radical prostatectomy, or complete removal of the prostate and seminal vesicles including reconstruction of the bladder to the remnant urethra, has been shown to reduce the incidence of distant metastasis and death from prostate cancer as compared to active surveillance. However, open surgery involves significant side effects and morbidity including incontinence, impotence, pain, significant blood loss, and a lengthy recovery process.

The innovative work of Menon and colleagues showed that the use of the daVinci Surgical System manufactured by Intuitive Surgical in Sunnyvale, California, could benefit the surgeon in allowing a difficult laparoscopic radical prostatectomy to be performed with the advantages that the robotic platform provides (see Figure 1). These benefits include a visual system that can provide 3-D vision. Unlike standard laparoscopic systems where the image is sent to a video monitor, the camera system transmits a dual image captured by a dual lens and dual camera head. When seated at the console, the surgeon views each image with a different eye and thus can see in 3-D inside the patient. The image is also magnified tenfold. 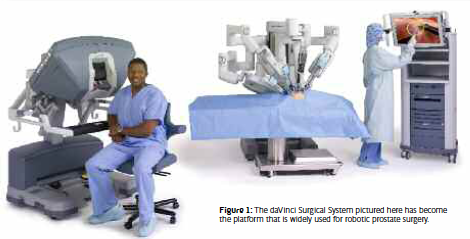 The robotic instruments are available in a variety of shapes and functions including scissors, monopolar and bipolar cautery instruments, needle drivers, forceps, etc. However, the differentiating feature of the robotic instruments is a hinged wrist near the instrument tip (see Figure 2). This robotic wrist mirrors the flexibility of the human wrist. Because this wrist is miniaturized, it allows exceptional mobility deep within the operative field, thereby facilitating dissection and suturing. 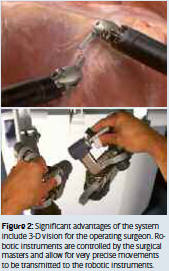 The robot interface also provides several advantages to the surgeon. The console is very ergonomic, allowing the operating surgeon to be seated with arms supported, thus greatly reducing fatigue. When performing surgery, the hand controls or “masters” have the ability to filter hand tremor. With the additional ability to scale the motion of the robot instruments, incredibly delicate and fine work can be performed. This dexterity allows even very complex skills such as laparoscopic suturing to be performed with amazing ease. With these multiple benefits provided by the robotic platform, the application of laparoscopy to prostatectomy has become a much more feasible option.

There are some limitations to the ability of the robot. There is no tactile feedback to the robotic instrument and this can be a considerable hurdle for experienced open surgeons when adapting to the robotic approach. Many steps of the radical prostatectomy are facilitated by feel. Therefore, the improved visualization that the robot provides must be substituted during these steps. This, however, does represent a significant learning curve.

Our technique for performing robot prostatectomy is quite similar to many other centers with a few modifications. We utilize a six port transperitoneal approach. By using a transperitoneal approach, the peritoneum must be incised to gain access to the bladder and prostate. This is performed over the anterior abdominal wall. With the bladder dropped, the endopelvic fascia is visualized and incised to mobilize the prostate from the surrounding levator muscles. We then use a laparoscopic stapler to ligate the dorsal venous complex (see Figure 3). The bladder is then divided away from the prostate and the seminal vesicles and vasa are divided next. The rectum is then mobilized away from the prostate and erectile function nerve sparing can then be performed. We do this in an athermal technique which avoids any heat sources such as cautery to avoid additional injury to the neurovascular bundles. The urethra is then divided, freeing the prostate and a long urethral stump is left to increase the speed of continence return. The prostate is placed into a laparoscopic entrapment sac until the rest of the case is completed. A lymph node dissection can easily be performed if indicated. Reconstruction is then performed. Our technique has pioneered the use of an anterior plication stitch as shown in the diagram (see Figure 4). This helps to take tension off the anastomosis and to perhaps lengthen the functional length of the urethra. We have noted that since we have been using this stitch that continence has returned earlier on average than without the stitch. 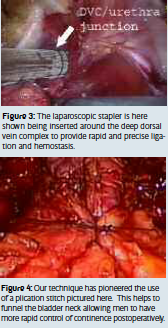 We have found that we can perform this robotic operation for most men who have had previous abdominal surgery, regardless of their body habitus or size of the prostate. For example, this operation has been successfully performed on men weighing up to 360 pounds with a prostate weighing up to 250g (a normal-sized prostate is about 30g). Many surgeons have worried that previous hernia repairs could lead to complications with open radical prostatectomy. However, we had little difficulty, even in cases where patients had previous laparoscopic hernia repairs with mesh. Therefore, virtually all men who are candidates for open radical prostatectomy may be candidates for robot prostatectomy as long as they have what appears to be localized prostate cancer.

A positive surgical margin is defined as the presence of tumor cells adjacent to the inked surgical margin. Increasing experience has been shown to be a large determining factor for the incidence of positive margins in the setting of open prostatectomy. This is likely true for surgeons performing robot prostatectomy as well. Our margin rates have steadily improved to the point where we have seen rates of 4-5% for organ-confined disease and 11-12% overall.

Robot prostatectomy is the new preferred method of performing radical prostatectomy in the U.S. Patients convalesce more quickly and experience fewer complications. Functional outcomes seem equivalent and may be improved. Cancer control in the form of margin rates and early PSA recurrence are also comparable at this point. Future improvements will allow improved prostatectomy results and wider application of the robotic platform to other procedures and specialties.